Schmitz, who also serves as executive director of South Dakota Soybean, is excited to see progress in the development in trade negotiations and deals.

“The pioneer spirit of our ancestors remains strong among farmers. We are constantly seeking new opportunities that lie just over the horizon,” Schmitz said.

Though weather and prices challenged farmers this year, Schmitz maintained an optimistic attitude for the future with this new agreement.

“Fair trade agreements offer farm and ranch families the opportunity to do what we do best; produce safe, renewable and abundant food, feed, fiber and fuel for a growing world population.”

Schmitz added “Fair agricultural trade between nations raises the poor out of poverty, generates renewable wealth and supports peace and prosperity for all people.”

Both South Dakota farmers were honored to attend the ceremony and look forward to learning more details and taking advantage of this new opportunity for U.S. agriculture. 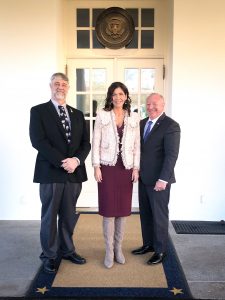 Craig Andersen, SD Governor Kristi Noem and Jerry Schmitz at the White House for the Signing of the Phase One China Agreement