“Was That the High?”

The question posed in the title is one that market participants utter each year around this time. The answer to that question is usually only known several weeks or even months later when more of the marketing year has unfolded and crop size is determined. As of this writing, December corn had set at least a short-term top at $6.38 per bushel on May 7 while November soybeans put in a high of $14.61 on May 12. Seasonal tendencies can be helpful when used as a guide during times of heightened volatility like 2021 has shown itself to be.

If December corn has indeed put in its high for the calendar year, it would be just the third time since 1990 in which that has occurred during the month of May. The other two instances were in 2018 and 2000. While May isn’t the most popular month to set highs, it is in a window that tends to see highs scored. June and July hold the title for most highs set since 1990 with five years each followed by March with four. Looked at collectively, December corn sets its highs between March and July about 60% of the time. Extending it one month further, December corn has made its highs between March and August almost 70% of the time since 1990. 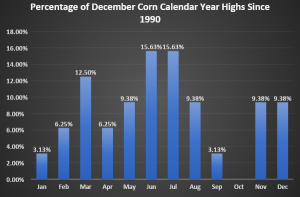 In soybeans, it is slightly more common to see highs in May with the November contract having done so four times since 1990 if the 2021 highs hold. As with corn, the most populous months for highs are June and July at six times and five times, respectively. Highs are set between May and August just over 50% of the time, although September has also seen calendar year highs set that month four times over the last 32 years. In 2020, November soybeans rallied throughout expiration, becoming the fifth year since 1990 to set calendar year highs in the final month of trade. 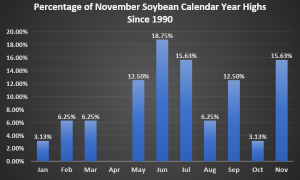 With the way the 2020/21 marketing year has unfolded, there has been an understandable amount of trepidation by the farmer in selling next year’s crop too soon, as happened last year. As the aforementioned data has shown, 2020 was a bit of an anomaly when held up against over 30 years of history. Seasonal tendencies show us highs tend to be set once the crop has been planted and key developmental phases are upon us. While analogous years can provide guidance, they cannot tell the future. Sound risk management and a solid marketing plan should be utilized to take advantage of the heightened volatility and lock in what should be a profitable year for all, regardless of when highs are set.

By Tregg Cronin, published in the Summer 2021 Soybean Leader