Understanding the Relationship between Soybean Cyst Nematode and Fusarium on Soybean

The soybean cyst nematode (SCN) is a major yield limiting factor in soybean production in South Dakota. Given SCN is a soil-borne pathogen, there are possibilities for the nematode to “interact” with other microorganisms that live in the soil. Interaction between organisms, in the ecological context, refers to “the interplay of organisms” in the environment they live. If the interactions are synergistic, a disease complex can develop. On soybean, the disease complex involving SCN and Fusarium, the fungus that causes sudden death syndrome and root rot, has gained a lot of attention in the recent past.

South Dakota State University conducted studies to investigate the interaction between SCN and Fusarium on soybean. Ten species of Fusarium were identified capable of causing root rot of soybean in South Dakota in a study funded by the South Dakota Soybean Research and Promotion Council (SDSRPC). Among the ten species of Fusarium, Fusarium proliferatum was the most aggressive and hence used to investigate the interaction between Fusarium and SCN in the greenhouse. The greenhouse study was set up using a SCN-susceptible cultivar and a SCN-resistant cultivar. Our results indicate that root rot severity caused by Fusarium proliferatum did not increase in the presence of SCN. In contrast, SCN reproduction was limited in the presence of Fusarium proliferatum. 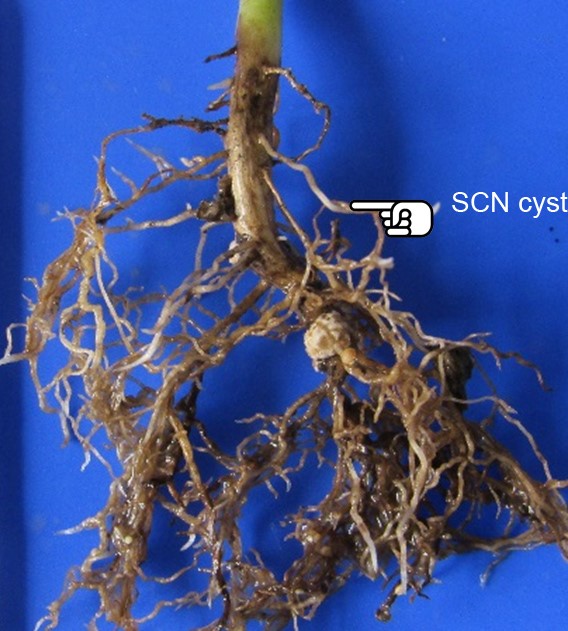 The findings from the greenhouse study were tested under field conditions at the South Dakota State University’s Southeast Research Station in Beresford. Two commercial soybean varieties — SCN susceptible and SCN resistant — were planted into a conventionally tilled field with a history of SCN. At harvest, soybean yield was collected from the center two rows of each plot in the field trial using a plot combine. We observed that while the presence of SCN is not necessary for infection of soybean by Fusarium proliferatum, root rot severity was higher in plots infested with both pathogens compared to when only SCN was present. Additionally, it was determined that the SCN resistant variety provided higher yield (an increase of 25 bushels per acre) as compared to the SCN susceptible variety in the presence of both SCN and Fusarium. The field trial for the Fusarium-SCN interaction study will be repeated in 2017 and 2018. 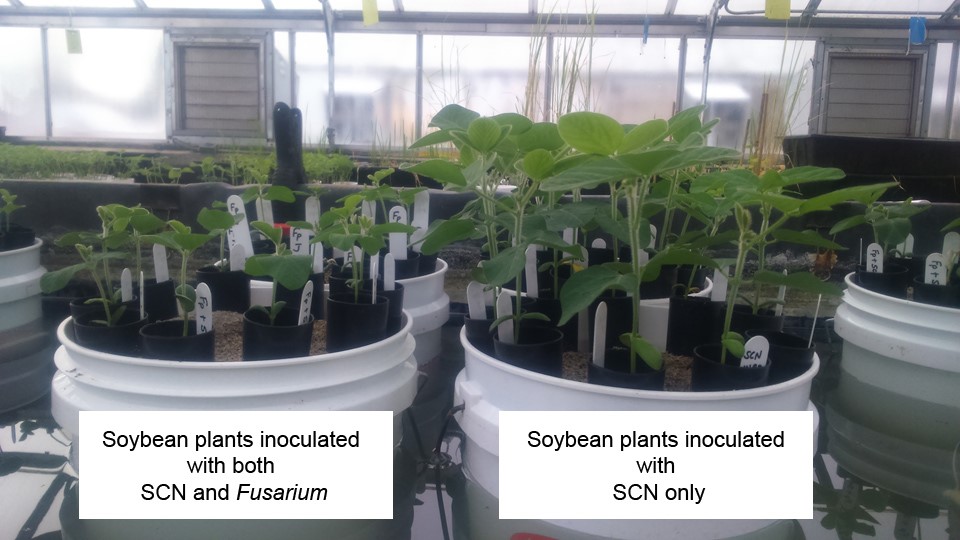 At present, SCN has been confirmed in 29 soybean producing counties of South Dakota based on a survey study funded by SDSRPC. In many of these fields, Fusarium is present. Generally, the interaction between SCN and Fusarium can vary over fungus species and cultivars as indicated in the research literature. However, a major concern with the interaction of SCN and Fusarium on soybean is yield loss. Individually, both the pathogens cause substantial yield loss. For example, the estimated losses caused by SCN and Fusarium in the United States in 2014 were 125.2 million bushels ($1 billion) and 4.3 million bushels ($47 million) respectively. It is necessary to manage the Fusarium-SCN disease complex. And the best way to do so is by preventing the complex from occurring. While Fusarium diseases can be managed by using fungicide seed treatments, SCN is more problematic. Once present in the field, SCN can never be eradicated. Conversely, SCN numbers can be managed by adopting proper management strategies.

1) Monitor SCN numbers- Periodically test SCN by collecting soil samples from the field and submitting them to the SDSU Plant Diagnostic Clinic. SCN testing is free to the grower and is sponsored by SDSRPC.

The authors thank the South Dakota Soybean Research and Promotion Council for funding the Fusarium-SCN interaction study as part of the project titled ‟Association of soybean cyst nematode with biotic stress factors (Fusarium and soybean aphid) and management”.