The Voice of Ag in Unison

In addition to a global pandemic and a hotly-contested Presidential election, the year 2020 will be remembered for another milestone: the year South Dakota agricultural organizations came together to tell a unified story.

The media reports that followed the outbreak of COVID-19 were not positive for agriculture. Stories of dairies dumping milk when schools and restaurants closed, animals euthanized for lack of processing capability, and store shelves that were void of some food products scared consumers. Independent surveys noted that 75-80% of consumers believed the pandemic exposed a fundamental flaw in the U.S. food system that needed to be addressed.

And yet, as spring turned to summer, you saw agriculture at work across South Dakota. The sight of cattle grazing and planters crossing the fields seemed in direct contrast to what we were hearing in the news. The fact is there was a ripple in the food chain when the pandemic reached America. The chain wasn’t broken; it was interrupted. But let’s face it, that’s a hard story to tell to the average shopper who struggles with understanding that milk doesn’t originate from the cooler in the back of the store. It was time to change the narrative.

That narrative started to change when a couple ag groups saw an opportunity to get out the message that agriculture is still growing strong. They called a meeting of agricultural stakeholders: commodity groups, financial institutions, conservation organizations, educators, government agencies, and advocacy groups. Those stakeholders formed a task force to hire an advertising agency from South Dakota with the goal of getting the positive message out to the consumer.

As with any new endeavor, the effort took longer than expected to launch. How could all these entities agree on messages and images that tell the all-encompassing story of the “web” of agriculture working together: growers, processors, truckers, grocery stores, food banks, restaurants – the thousands of people who bring food from the field to the table and make South Dakota great? How could we start to get the consumer to understand how social, economic and natural factors disrupt one sector, causing everyone to feel the ripple effect?

It was possible and it’s happening. The Unified Ag Story will premier early in 2021 with a foundational video, website, and television commercials.

So stay tuned – South Dakota agriculture is unified and has a dynamic story to share. And we’ll tell it together. 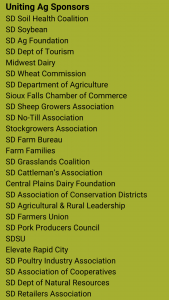