Spring into Action and Be Seen

Spring brings planting season for South Dakota farmers. That means more tractors pulling planters and other farm equipment down highways and roads across the state. That also means increased potential for farm-equipment-related accidents between motorists and those farmers.

“We encourage farmers to avoid high traffic times, busy roads, and most of all, have equipment well marked,” says David Struck, South Dakota Soybean Research and Promotion Council. “All farm equipment should have flashing lights, reflective tape, and the slow moving vehicle emblem.”

“Reflective tape and new LED lights not requiring electrical power make it simpler to bring older equipment up to current lighting and marking standards,” continued Struck. “With farm accidents on the rise, being seen is critical to avoiding rural farm crashes.” 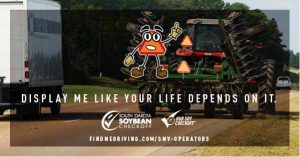 The slow moving vehicle (SMV) emblem is required on all vehicles traveling no more than 25 mph. For towed equipment, the emblem must be on both the towed attachment as well as the towing vehicle. This orange, fluorescent triangle was invented in 1963 in response to research showing that over half of the highway fatalities involving farm equipment were rear-end collisions. Interestingly, the emblem’s unique shape occurred as creators tested multiple designs. The triangle ends would catch and rip researchers’ clothing, so the corners were removed from the triangle to create the unique shape of the SMV emblem.

The emblem is gaining new attention as the mascot for the www.FindMeDriving.com campaign, supported by the South Dakota Soybean Checkoff. Through the acronym name of SAM, the mascot reminds drivers to Slow down, Assess their surroundings, and Move with caution, when driving near SMVs. The site also offers road safety tips, equipment requirements and resources for SMV drivers.

“We encourage farmers to make it a habit to check that all lights are in working order and the SMV emblem is bright and in place before driving on roads,” concluded Struck. “Your safety, the safety of your equipment, and the neighbor driving on the road are at risk. Let’s do all we can to be seen and avoid a costly accident.”