Soybeans on the Road 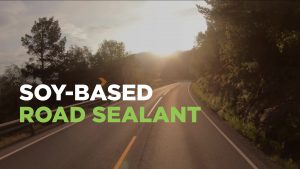 A relationship was formed to supply the city of Sioux Falls the products applied to the heavily traveled Marion Road in the western part of the city, according to Ostrem.

“The hope is that by using this, we can preserve asphalt, and [with] the product called PoreShield on concrete, on the streets and the bridges of Sioux Falls,” said Ostrem, “and hopefully there is interest in other areas too, like the asphalt product Renew, we’re hoping that we can use it on county roads and state roads to provide longevity to them.”

South Dakota weather creates a challenge in maintaining quality roads. That’s where soy-based Renew, first applied to Sioux Falls asphalt several months ago, and PoreShield come in. PoreShield protects against water, salt, and freezing/thawing cycles to increase the life of the concrete.

“Both products can be applied very easily over the top. They usually penetrate about an inch-and-a-half into the concrete or the asphalt,” he said. “Estimated life expectancy increases perhaps seven years, and that can vary, but that’s the goal.”

There are more than seven-and-a-half pounds of soybean oil per gallon of PoreShield in the form of soy methyl ester. On average, PoreShield uses 200 bushels of soybeans per mile of highway. PoreShield is also applied to patios, sidewalks, driveways and other construction and architectural projects.

“It’s a renewable, sustainable product and it’s produced by South Dakota farmers,” said Ostrem, “so what better relationship to have the streets of our communities, our counties and our state highways being sustained longer with a product that we raise right here in the state.”

Because it’s an opportunity to bring quality products to communities while driving demand for soybeans, Ostrem calls PoreShield and Renew a win-win for everyone.