They may not have realized it at the time, but last year, Tracy Chase’s sophomore class at McCook Central High School in Salem were among the first South Dakota students to test out a new science curriculum incorporating soybean genetics. The program has its roots in the South Dakota Soybean Research and Promotion Council.

Chase teaches multiple subjects including biology, animal science, anatomy as well as agriculture, food and natural resources. While attending the agricultural education teachers’ annual winter conference, she took in a workshop on a program integrating soybean genetics into the classroom. Since Chase teaches about genetics, she picked up a manual and packets, and test piloted the Soybean Science program last winter and spring. As a farmer as well as a teacher, she recognized many of the current issues facing agriculture were brought up in the lessons. 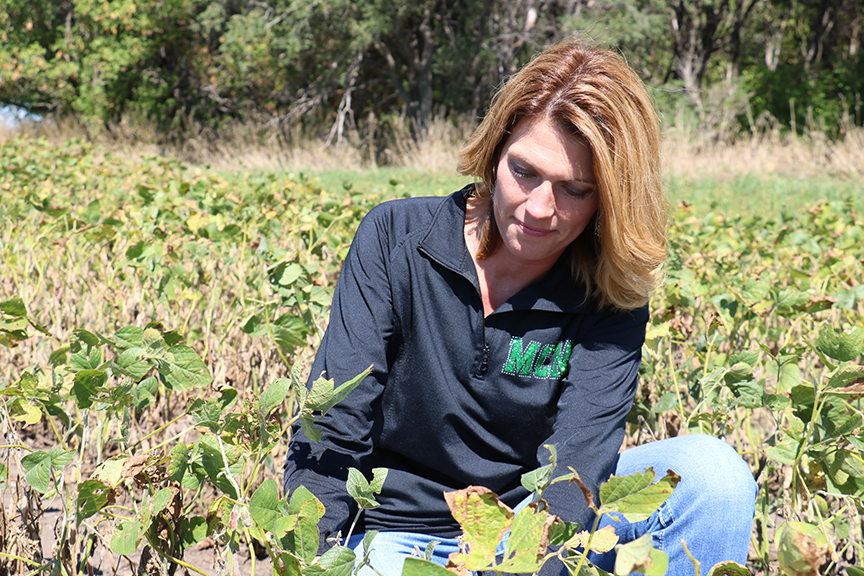 Chase says the lessons began with the basics of genetics, examined DNA and even showed how DNA can be extracted, which students then attempted. Students even learned how Roundup Ready® crops are developed.

“This led to big topics like GMOs, so we were able to have debates on the pros and cons,” Chase says. She even worked with an English instructor who was teaching debate to bring students from that class into the conversation. “I’ve never seen kids get into it like they did.”

South Dakota Soybean Program Director Kelly Wubben says the process for developing a curriculum that incorporated soybeans began in the summer of 2015.

“The inspiration to start the Soybean Science program came from a passion from our board to educate today’s youth about agriculture,” Wubben says. “We also heard from agricultural education instructors that there was a need for accurate, easy-to-use lessons to help them teach about GMOs and other important agriculture- and food-related topics in the classroom at a high school level.”

South Dakota Soybean worked with curriculum experts to develop the educational materials that Chase piloted in her classroom. Chase, who also farms with her husband, says the lessons bring up a lot of pertinent issues to current and future farmers.

“Overall, the program gives information on the science behind soybean production,” Chase says. “Plus, it’s very hands-on, which helps the kids think critically.”

Chase says there are a number of farms in her area that are being passed on to family members. She believes the curriculum helps the next generation gain a fuller understanding of how science and agriculture are intertwined.

“The overall goal for students is to understand that science doesn’t just happen in books. It’s real,” Chase says. “What happens in labs today will affect them in five years or less.”

“The Soybean Science lessons are relevant not only for agricultural education, but for science classes as well,” Wubben says. “It benefits not only farm kids, but also the next generation of consumers who will hopefully have a better understanding of GMOs.”

In addition to the materials geared toward high school students, the South Dakota Soybean Association supports the development of a similar educational program designed for elementary students. That program is expected to be available in 2017.