South Dakota farmers rely upon a system of rural bridges to effectively deliver their soybeans or other commodities to the local elevator or processing facility – often serving as the first step in a journey to a customer halfway around the world. A well-maintained rural bridge inventory is therefore essential to farmer profitability. 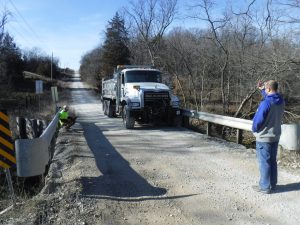 Unfortunately, a considerable number of rural bridges in South Dakota are load restricted, requiring vehicles transporting agricultural commodities to detour – often at significant distances. This results in additional costs being inserted into the nation’s food delivery system and diminished profitability for South Dakota farmers. While the need to maintain and upgrade rural bridges is on the increase, available resources to address this challenge remain insufficient.

In an effort to promote better evaluation and management of the state’s rural bridges, the Soy Transportation Coalition (STC) has been promoting an innovative project designed to demonstrate the effectiveness of load testing technology when assessing the load-carrying capacity of rural bridges.

The focus of the project is to evaluate bridges utilizing load testing sensors attached to the underside of the bridge. After the sensors are installed, test loads are driven over the various segments of the bridge surface to determine a precise understanding of the capabilities of the bridge. Half of the up-front costs of the project is provided by the STC. Successful projects have already occurred in Iowa, Kansas, and Michigan. Conducting a similar project in South Dakota is being explored. 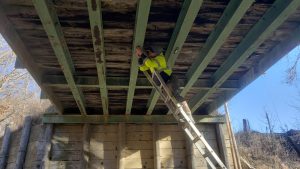 “Since we and our families utilize rural bridges on a routine basis, safety will always be most important,” says Todd Hanten, a soybean farmer from Goodwin, South Dakota, and director on the Soy Transportation Coalition. “We appreciate the South Dakota DOT, county highway superintendents, and others for ensuring a safe system of rural bridges for the public. We hope to be able to conduct a bridge load testing project in South Dakota since that will result in a more thorough understanding of which bridges are most in need of repair and which ones can safely handle trucks transporting soybeans or other products important to our state economy.”

On December 10th, Van Buren County in southeast Iowa partnered in this project to test several rural bridges that had been originally assessed with load restrictions. Each bridge had been load-limited due to a concern based on the traditional approach of a visual inspection and theoretical calculations to determine a bridge’s load-carrying capacity. However, after evaluating the bridges via load testing sensors, the load restriction on one bridge (25 tons) was able to be safely removed – allowing it to accommodate legal loads. Two other bridges – one with a seven-ton load restriction and the other with an eleven-ton load restriction – were also evaluated. After performing the load testing with the sensors, the postings were increased to 17 and 24 tons, respectively. Additional load testing of bridges in Van Buren and a number of other Iowa counties is being planned for the spring and summer of 2021.

“South Dakota soybean farmers will continue to support additional funding for rural bridges throughout the state,” says Hanten. “However, the STC’s bridge load testing project demonstrates that we can increase understanding of the condition of these bridges, which will decrease the number of restricted bridges while also directing taxpayer dollars more effectively. I am hopeful such a project can occur in South Dakota in the near future.”

Established in 2007, the Soy Transportation Coalition is comprised of the South Dakota Soybean Research and Promotion Council, twelve other state soybean boards, the American Soybean Association, and the United Soybean Board. The goal of the organization is to position the soybean industry to benefit from a transportation system that delivers cost-effective, reliable, and competitive service.