There is a common thread among top winners in the 2020 South Dakota Soybean Yield Contest. First Place finishers have a desire to improve their per/acre soybean output. Entering the contest annually is their opportunity to try a production tactic that might or might not work. It might or might not be cost effective on an entire farm. Regardless, it is a grower’s chance at discovery, a chance at growing a few more bushels an acre, and a chance at being more profitable. 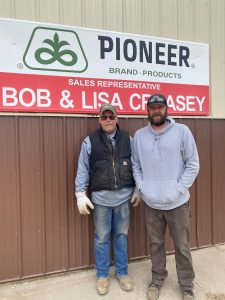 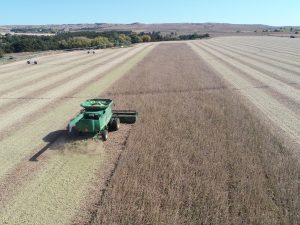 A similar motivation is the reason Jake Wurtz enters the yield contest. “I push that plot a little more than I do my normal field to see how it will turn out,” said Wurtz, the farm 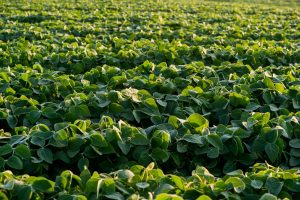 manager at the Greenwood Hutterite Colony in Douglas County, “and then I apply it to a bigger part of the farm.”

Wurtz had the top yield in the Group 2 No-Till category of the contest. His yield of 96.88 bushels an acre, the third highest in the contest, he credits to fertility, but it was not commercial fertilizer.

“We raise a lot of livestock, we use a lot of turkey manure,” said Wurtz. “That particular spot had about five ton an acre of turkey litter on it, and that’s all the fertility there was on it.”

He doesn’t recall the name, but Wurtz used an experimental biological only on his contest soybeans and was pleased with its performance. “I think the microbes got going in there and a lot of nutrients became available,” said Wurtz, describing a possible reaction of the biological mingled with turkey manure. “From what I’ve seen,” he said, “I think I’ll apply [the biological] on more acres this year.”

For Lance Olesen, a single pre-plant tillage pass is all the soil disturbance he allows to knock down early season weeds and to avoid using a burndown herbicide. The Turkey Ridge 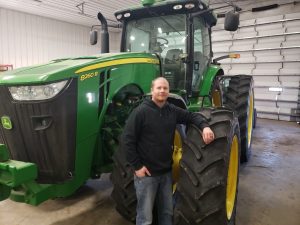 “We actually use a high-speed disc and only run about 1 to 2 inches in the ground,” said Olesen.

Olesen uses a 15-inch-row planter to get beans in the ground. “We switched to that last year,” he said, explaining that his goal is to plant corn with his 30-inch-row planter while putting in narrow-row soybeans, effectively getting soybeans planted earlier. “That seems to be a big yield driver is to have them in earlier,” he said. There are added benefits from an early canopy. “We’re able to capture more sunlight and [have] way better weed control and it helps conserve moisture too.”

Strong soybean yields are a family trait for Chandler Standy at Platte, South Dakota. His dad was a yield winner a few years ago. The younger Standy topped the 2020 Group 0 or 1 Irrigated category with

just a shade over 84 bushels an acre.

“We have underground drip irrigation here, so we can’t do any deep tillage,” said Standy, adding that one or two passes with a Turbo-Till prepares the seedbed. They plant in 30-inch rows.

There are few weed issues other than occasional velvet leaf, controlled by Roundup prior to emergence, but Standy’s aim is to use no more herbicide than necessary.

“We had a little bit of palmer amaranth starting to come up,” Standy said. “I go out and walk the fields for that and if I see something…I go out there and chop them down.”

Standy maintains regular scouting once the soybeans are up. “I take tissue samples once every week and send them in and see if they’re lacking any nutrients,” Standy said. “We’ve got that underground drip system. If we’ve got anything lacking, we can inject it right in through the system; it goes right to the roots and that seems to really help.”

A precision retrofit added a little speed, and a lot of accuracy to Travis Swisher’s soybean planting. Swisher’s point was to get seeds at the right depth and the right distance apart. 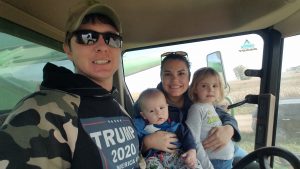 Travis Swisher and wife, Taylor, and their children, Cole (age 1) and Molly (3)

“We planted somewhere between 4 ½ and 5 [MPH],” said Swisher, less impressed with his speed than with his seed placement. “We had great spacing, great singulation and great emergence.”

Swisher, who topped the Group 1 No-Till category with a yield of 81.05 bushels an acre, applies Authority Assist herbicide pre-emergence, followed by Roundup and then Dimetric post-emergence. For 2021, Swisher, who farms north of Groton, South Dakota, is considering spraying Endura fungicide to ward off white mold.

Primary among Swisher’s reasons for entering the soybean yield contest is his moral obligation to the land.

“The wagon stopped one hundred-thirty-some-odd years ago right here,” said Swisher. “God put us here for a reason and I think that reason was to show what we can do on the soil that we get to work with.”

Dean Bosse’s soil, between the Sioux and Missouri Rivers, is too wet to farm maybe two out of ten years, but it produces well for the Union County, South Dakota farmer. He won the 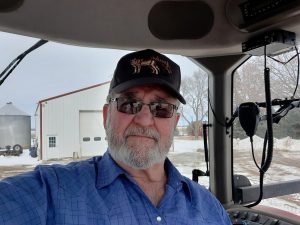 Group 3 No-till category with 80.06 bushels an acre, according to Bosse, without babying that plot. “We didn’t do anything special,” said Bosse, adding that adequate subsoil moisture “carried us through” the dry late summer.

Bosse is proud of the money he saves with zero soybean tillage. “We don’t have to go out and spend that $15 – $20 an acre,” he said. “With these no-till planters we can go right in there and plant in the cornstalks.”

To manage weeds on his 30-inch rows Bosse varies his herbicide chemistries, but is especially grateful for one in particular. “Liberty has been a lifesaver or us here, I’ll tell you that,” said Bosse, who uses Liberty post-emergence along with Enlist. His pre-plant herbicides are Authority First and Roundup.

At age 77, Bosse continues to enter the contest because his dad did. “It’s just kind of a challenge,” he said, “to see what we can raise.” 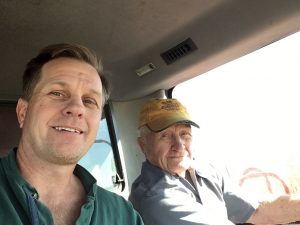 “We have quite a bit of highly erodible land,” said Voigt, explaining his reasons for not tilling. “It’s kind of worked out pretty good for us to do it that way.”

Voigt drilled his contest soybeans in 13-inch rows, but plants some of his crop in 30-inch rows, depending on whether the planter is being used for corn. He uses Acceleron seed treatment for his earlier planted soybeans, but later ones are planted without. He hires insecticide treatment if he determines through scouting that aphids, bean leaf beetles or spider mites have crossed economic thresholds.

During Voigt’s upbringing, his father farmed land belonging to a sister and two brothers, each visually impaired. Paul Voigt came back to farm that land after getting a college degree, encouraged by his eighth grade-educated father. “Once I got out of college,” said Voigt, “I decided the farm looked pretty good.”

One yield winner pointed out that there is often less than a bushel an acre that separates the top spot in a category from those who did not place. Voigt concluded that there are growers who “have some really good ground and really good practices and they’re really good farmers,” he said. “I’ve just probably been a little lucky.”