South Dakota Soybean Association (SDSA) calls on South Dakota soybean growers to lead. The organization will hold board elections at the SDSA Annual Meeting on December 6, 2018, at 4:30 p.m. directly following the AgOutlook Conference and Tradeshow at the Ramkota Exhibit Hall in Sioux Falls, S.D. The districts up for election are: Two, Three, Four and Six, as well as three at-large director seats.

“Now is a prime example of why we need commodity organizations to help out. When prices are low and things are tough with farming economy, it is a great chance to be part of this organization and have a voice in making decisions going forward and help shape our policy priorities,” said John Horter, a farmer from Andover and SDSA president.

A farmer-led organization, SDSA gives a strong voice to its members through legislation and public policy. The organization is governed by a board of farmer-leaders who are elected by the members of SDSA. The board includes directors from seven districts, plus three at-large directors. 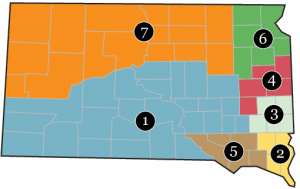 Directors must become a member of SDSA to hold a board seat. Directors must live in a county from the district he or she is representing. Candidates for the at-large board positions may live in any soybean-producing county in South Dakota. Directors must produce and market a minimum of 250 bushels of soybeans on an annual basis.

All board members are elected to serve a three-year term.

Below is a list of the counties represented by the districts with open seats.

Applications are due to the SDSA office by December 3. Candidates may also be nominated at the SDSA Annual Meeting on December 6, provided that they have filled out an application.