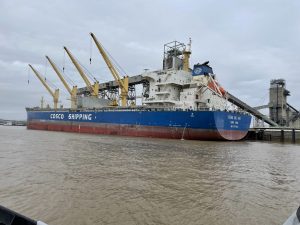 “[The plant] was barely running after the hurricane,” he said, following a tour of the port. “They were able to get it going to about 50 percent in [two] or three months, but since then, this progress and finishing getting back to 100 percent has been slow. So, there’s some bean back-up and some peoples’ bases are suffering because of it, but it’s another supply chain issue that blindsided us again, so not much we can do about it.”

In spite of the damage from the late 2021 storm, Hanten remarked on the overall efficiency of the port’s soybean handling, which he called greater than he had ever seen, comparing it to clockwork. “Two million bushels in every day, and two million bushels out every day, unloading barges and loading ships,” he said, “so 700 million bushels every year out of that [facility].”

But the primary purpose of the tour – sponsored by the Soybean Transportation Coalition prior to the 2022 Commodity Classic – was to see the port and meet New Orleans Port Authority officials, who are grateful that soybean growers invested checkoff funds in a feasibility study. That study led to the dredging project deepening the Mississippi River channel through a 256-mile stretch in Louisiana, from New Orleans to Baton Rouge. “There’s been a lot of work since then,” said Hanten. “They said soybean farmers putting that $2 million check on the table brought a lot of people to the table from government to other industries and other private investors.” 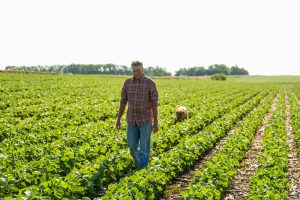 Hanten, who farms near Goodwin, in northeastern South Dakota, summed up the experience by recalling how proud he is to be part of the South Dakota Soybean Checkoff. “One of my best moments probably since I’ve been on any of these boards was that day. There was a general there that works for the Port Authority of New Orleans and several other dignitaries from Louisiana,” he said. “They were thanking us, and it was heartfelt, they really want to be the gateway for ag commodities to the world.”