Emmanuel Byamukama is one of these experts. The South Dakota State University (SDSU) Extension Plant Pathologist is researching ways that farmers can improve soybean production in the state and has focused on soybean cyst nematode (SCN) impact. 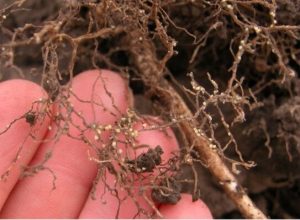 “The first step in managing SCN is to know if you have it in your soil,” says Byamukama. “With other soybean diseases, like white mold or sudden death syndrome, you can see their symptoms easily on the plant and can determine if the disease is present. With SCN, the nematodes are nearly microscopic. By the time farmers can see their destruction, a lot of yield loss would already be occurring.”

The soybean cyst nematode is a small pest that lives in the soil and feeds on the soybean root system. Once in the soil, SCN is nearly impossible to eliminate but there are ways to manage it through crop rotations and planting SCN-resistant soybean varieties to help reduce the damage. SCN is found in virtually every U.S. soybean-producing state and has been detected in 34 South Dakota counties.

SDSU Extension is offering free soil tests for farmers to find SCN presence or to determine if SCN population numbers have changed. The tests are at no cost to the farmer because of funding support from the South Dakota Soybean Checkoff.

“We’ve been offering free soil tests for at least seven years—as long as I’ve been here—and maybe longer,” Byamukama says. “We conduct soil testing so the grower can know the amount of SCN in their soils. This number, or population density, can help them make changes to prevent soybean yield loss.”

The SCN tests can be economically beneficial on several levels. There are private firms that also offer SCN soil tests, but if a grower has many acres to test, the cost can add up, Byamukama says. By making management changes to elude SCN, yields that would have been lost due to SCN are saved. And farmers are seeing the advantages of this service.

“The number of tests we’ve done has increased over the last several years,” he says. “We encourage growers to keep checking every two or three years to see if the SCN numbers are changing. If the numbers increase, that means whatever the producer is doing to control SCN isn’t working and changes need to be made. It’s a little easier to keep SCN populations down before they reach high levels in the soil.” = 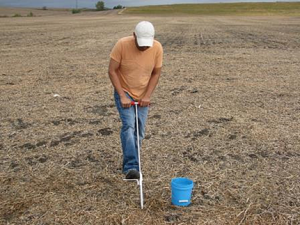 Soil testing is crucial for detecting the presence of soybean cyst nematode (SCN) in the field. Nematodes live in the soil and feed on soybean roots, causing revenue loss of more than a billion dollars annually nationwide. Photo: Emmanuel Byamukama

If SCN is found in a field, SDSU Extension specialists can help producers with management options to reduce soybean damage. For producers who have not tested for SCN yet, soil sampling can be done basically anytime in spring, summer or fall. If previous soil tests have shown the presence of SCN, soil sampling for another test to detect changes in SCN numbers should be done in the fall after soybean harvest, Byamukama says, as that is when the SCN population is at the highest in the soil.

The soil tests are conducted at the SDSU Plant Disease Diagnostic Clinic. Farmers can mail pulled soil samples to the clinic and are notified of their results within four to six days, depending on the volume of samples coming into the clinic. For information about the SDSU soil tests, visit the Extension website: https://extension.sdstate.edu/hg-type-testing-management-strategy-soybean-cyst-nematode-control

Download information on how to collect and mail soil samples for testing: https://www.sdstate.edu/sites/default/files/file-archive/2018-10/SCN-Soil-Sampling-Info-Sheet.pdf