A dry spring brought a timely end to planting for Jamie and Brian Johnson at Frankfort, South Dakota. They planted with what Jamie says were “no hiccups,” but soil moisture is in short supply. An inch of rain at their place in late June failed to provide consistent coverage. 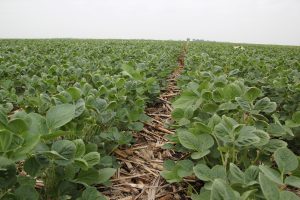 Despite the severe lack of rain, the Spink County couple’s crops appear to be doing alright,

“Things across our farm look pretty good,” said Johnson, a director for the South Dakota Soybean Association, explaining that even a little bit of rain would be adequate to sustain their crops for a while.

“We’re a no-till operation and we do a lot to conserve any moisture that we have, and soybeans don’t use a lot of moisture anyway, so that kind of helps,” she said. “If we can get to August when they really need a little bit more moisture, we can probably still see some decent yields out of these crops. You can see some stress in some fields, but I’d still say, for the amount of rain that we’ve had, it’s looking ok.” 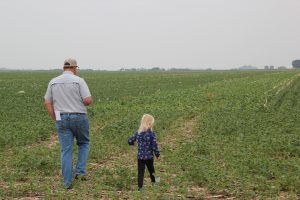 Hosting a field day on July 7 has given the Johnsons a chance to show the importance of planting trees and of incorporating cover crops in their soybeans and corn.

“Adding that different plant life into your fields really increases that organic matter in soil health,” said Johnson, referring to the sustainable farming practices featured during the field day.

“Keeping that soil covered helps with erosion, moisture retention, and water infiltration too,” she said. “When you do get a heavy rain event, you know, you get two inches of rain in just a matter of 20 minutes or something, you want to make sure all that water is retained and not running off.”

For now, however, that heavy rain event seems elusive for Jamie Johnson, who scans the horizon for any cloud that might produce rain. “We could use some more,” she says, “I wouldn’t complain.”