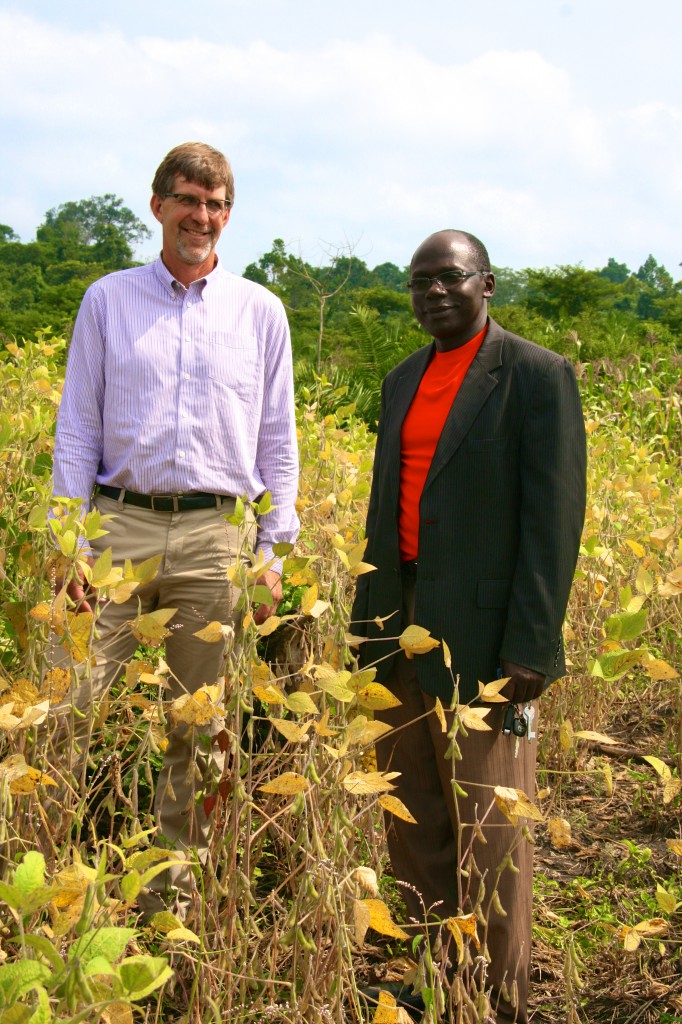 One might wonder what an African businessman from the largest city in Uganda has in common with a soybean farmer from Astoria, a South Dakota community of 139 people. The answer is a St. Louis-based organization linked us in the important job of feeding a growing world.

Today is World Food Day. We believe it is a reminder that global food security requires commitment as well as commercial connections.

Our businesses are located nearly 8,000 miles apart. Yet, both our organizations laid the intercontinental tracks that have now intersected. We are links in a supply and value chain that makes available affordable, nutritious and delicious foods in Africa.

One of us (Charles Nsubuga) saw the need for African businesses to help meet the growing demand for protein in healthy foods. Uganda alone is home to 37.5 million people, more than 13 times greater than the St. Louis metro-area population.

While working at a satellite station east of the capital city of Kampala, he earned extra shillings selling groundnuts to co-workers in 1978. Sales increased and this cottage business grew steadily — all signs pointing up until his country’s conflict with Tanzania that overthrew Ugandan President Idi Amin in 1979.

An eight-year stall did not dim his vision. In 1987, Charles launched Serve to Save Co., a bakery with two employees.

Meanwhile, the other of us (David Iverson) and father, Walt, were farming the land that David’s great-grandfather, a Norwegian immigrant, purchased in 1897. The operation progressed but in the early 1970s, the Iversons were looking for an additional source of income.

The switch to latex paints killed the market for linseed oil made from their flax. The decline in flax demand prompted the Iversons to be one of the first in their community to try planting soybeans, a crop that would produce both protein-rich meal as well as soybean oil.

Forty years later, David and Walt are still growing soybeans and have implemented many strategies so their family farm will continue to produce for future generations. For example, they use reduced-tillage practices, sometimes not tilling at all, to improve the soil health.

U.S. farmers like the Iversons now grow soybeans in 30 states, making it the United States’ second largest crop in cash sales — and the top-value crop export.

Therefore, U.S. soybean growers launched the World Initiative for Soy in Human Health Program, with its headquarters at the American Soybean Association in St. Louis. Thanks to soybean checkoff and U.S. Department of Agriculture Foreign Agricultural Service funding, WISHH has worked with SESACO and many other enterprises across Africa, Asia and Central America. WISHH has coached food industry entrepreneurs and their employees, often bringing them to Illinois, North Dakota, Kansas and Texas for in-depth training.

USDA and checkoff funding have also allowed WISHH to assist food pioneers with promotional programs tailored for their markets. SESACO conducts extensive campaigns that include “street kitchens” for people to learn that foods they already enjoy can be more nutritious when made with soy flour, soy isolates, textured soy protein or other high-protein soy ingredients. WISHH has supported supermarket campaigns in Kenya, radio in Rwanda, SMS text messaging in Nigeria, and more.

These messages are good news in a world where, according to the United Nations’ latest report released Oct. 2, about 842 million — or roughly one in eight people — are chronically undernourished. Their needs also create a role for humanitarian programs, such as the World Soy Foundation, which U.S. soybean growers also launched and headquartered in St. Louis.

Whether we live in the open spaces of rural Astoria or bustling urban hubs like St. Louis or Kampala, private-sector partnerships like ours prove that there is plenty of common ground between our countries.

Charles Nsubuga is the founder of Serve to Save Co. based in Kampala, Uganda. David Iverson is a fifth-generation farmer who grows soybeans near Astoria, S.D. He chairs the American Soybean Association’s World Initiative for Soy in Human Health, headquartered in St. Louis. Established by the Food and Agriculture Organization of the United Nations in 1979, World Food Day, Oct. 16, was first observed in 1981. For more information, go to www.worldfooddayusa.org.