The goal for 100-bushel soybean yields has been set, and South Dakota farmers and researchers are determined to reach it. “Our farmers do not want to fall behind our neighboring states in average yields and, with the increasing world demand for food, it is important for us to produce more with less,” says Craig Converse, director with the South Dakota Soybean Research and Promotion Council (SDSRPC). That’s why the SDSRPC has funded the High-Yield Soybean Environment research project at South Dakota State University (SDSU) and a statewide on-farm research network.

The High-Yield Soybean Environment Project is investigating ways to increase the state’s average soybean yield. Depending on the year, soybean yields in South Dakota average 30 to 40 bushels per acre. Higher yields are attainable as evidenced by 60 plus bushel yields in SDSU’s variety trials and by a top yield of 83.2 bushels per acre in the 2013 South Dakota Soybean Yield Contest. The widening gap between the state’s average yields and the average SDSU soybean variety trial yields is concerning. Researchers and farmers are working together to under-stand and narrow that gap. 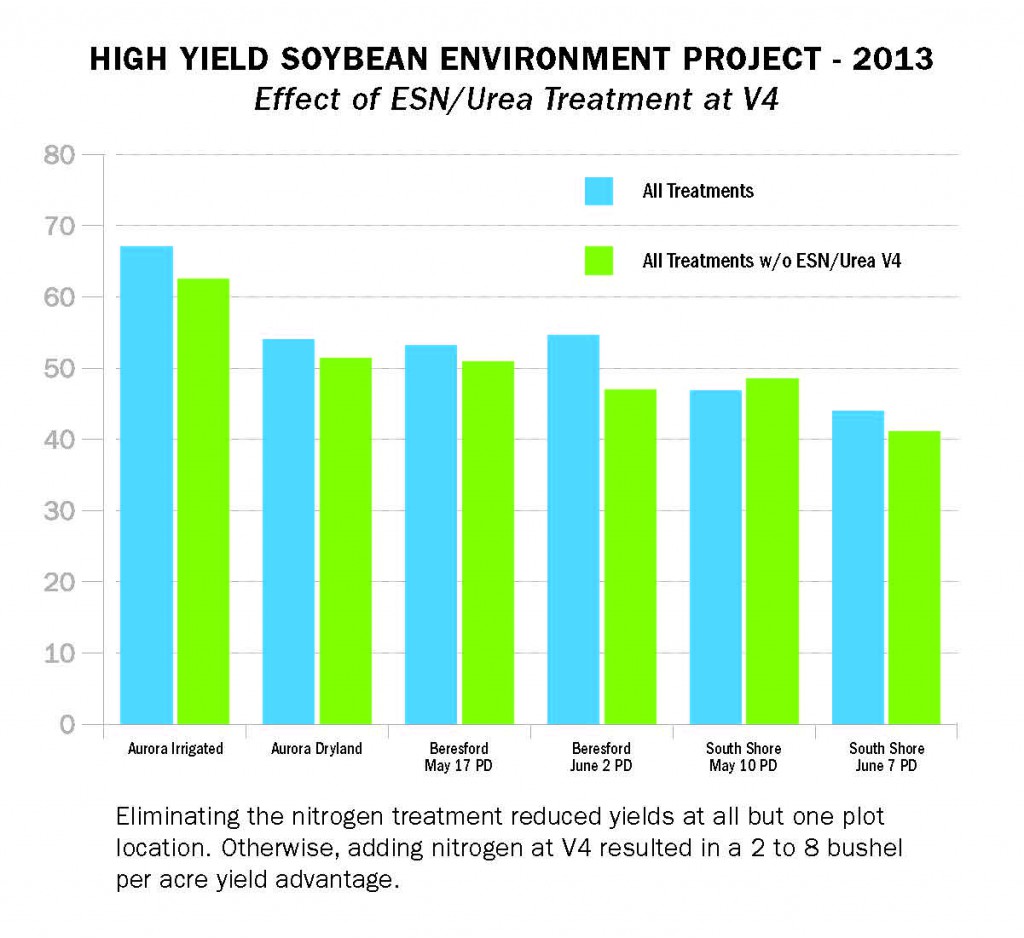 Gregg Carlson, SDSU professor of agronomy and leader of the research project, says 100 bushel per acre soybeans are doable in South Dakota. “The answer is in the intensity of management. There are many opportunities to gain four to five bushels per acre here and there,” Carlson says. Ways to accomplish this include selecting the right variety, planting with accuracy, focusing on soy-bean fertility, using pre- and post-emergence herbicide programs, and scouting and controlling insects and dis-eases. In addition, there are new products and practices to consider. Sorting out what works and what does not work is the goal of the High-Yield Soybean Environment Project.

2013 was the first year of the study. Treatments included Cobra herbicide at V-4, ESN plus urea blend coated with Agrotain at V-4, Task Force 2 (foliar fertility) at R-1, Bio-Forge (growth regulator) at R-3 and Quilt XL (fungicide) at R-3. The study was conducted in Aurora, Beresford and South Shore. Aurora was the only location with an irrigated experiment. The irrigated plot with all of the treatments except Cobra had the highest yield in the study with 76.9 bushels per acre. The highest dry land yield was 59.2 bushels per acre.

The most consistent yield-increasing treatment in the study was applying ESN plus urea at V-4. Yield increases from the in-season nitrogen application ranged from 2.3 bushels per acre to 7.7 bushels per acre in five of the six plots. Farmers don’t typically fertilize soybeans because the plants are able to fix most of the nitrogen they need through a symbiotic relationship with rhizobia bacteria. That may not be true when growers strive for higher yields. “We don’t think the rhizobia have the capacity to meet all of the nitrogen needs when soybean yields are above 60 bushels per acre,” says Carlson.

One practice that’s been effective in states farther south is applying the broadleaf herbicide Cobra to young soybean plants to increase nodes and branching, which can increase yields. In the South Dakota study, an application of Cobra at V-4 most often had a negative or neutral effect on yields, most likely due to the shorter growing season. The Cobra treatment has been eliminated from the study in 2014.

The other treatments yielded inconsistent results in 2013 and further testing will be necessary to determine their value. In addition to these treatments, the High-Yield Soybean Environment Project evaluates subsurface irrigation, tissue sampling and narrow row components in 2014.

“The goal is to identify treatments that will profitably increase yields and then test those in farmers’ fields. The cost of inputs and return on investment are really important questions,” says Carlson.

Craig Converse farms 930 acres of corn and soybeans on his family farm near Arlington. He agrees that small-plot research combined with on-farm research yields the best information for growers. “Small-plot research is important in the early stages of product development to sort through what may or may not work,” Converse says. “Sometimes what works in a small plot doesn’t always work in a larger field. Research studies are usually con-ducted on the best soils for uniformity purposes, and most farms in South Dakota have a lot of variability, which may affect how the product performs in a real-world situation. The On-Farm Network will provide replication of the same products and practices so we can gain confidence that the products will work on our farms.”

To read more articles like this, visit the SD Soybean Leader page here.