Nearly every new farm implement, regardless of color or brand, is equipped with a precision technology capability. Whether it is auto-steer or remote sensing technology, precision agriculture technology and acceptance are expanding rapidly.

A study by the U.S. Department of Agriculture’s Economic Research Service (USDA-ERS) shows that many farmers are adopting precision technologies and are saving money because of it.

According to the USDA-ERS report, yield mapping via GPS grew faster for corn and soybeans than for other crops. 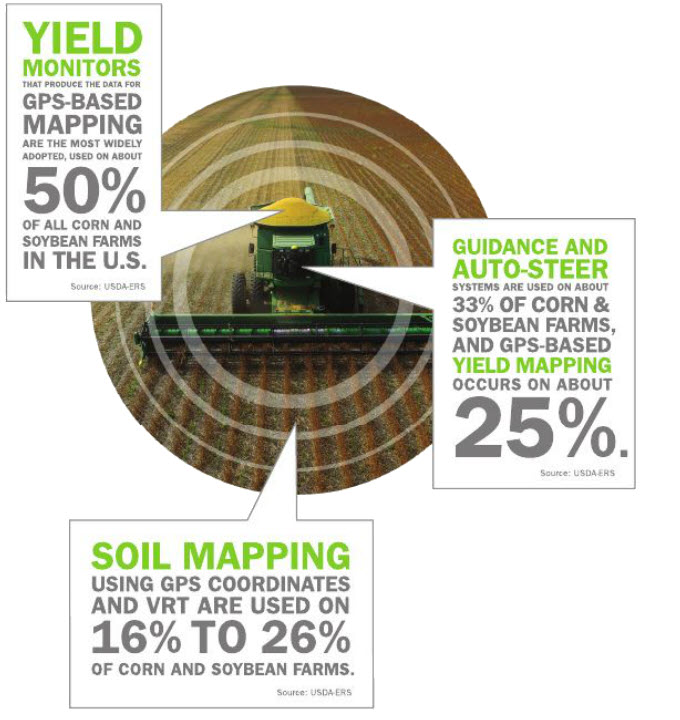 Corn and soybeans have higher shares of acreage using yield mapping than other crops, but the USDA-ERS study shows the use of yield maps has increased for crops like peanuts, rice and spring wheat in recent years.

Farmers use precision agriculture technologies to improve efficiency and maximize inputs. According to the USDA study, guidance systems, mapping and variable rate technologies all show positive impacts on both net returns, including overhead expenses and operating profits for a U.S. corn farm of average size.

GPS mapping shows the largest estimated impact among precision technologies, with an increase in operating profit of almost 3 percent on corn farms. The impact of mapping on net returns is almost 2 percent.

Variable-rate technology raises both operating profit and net returns on corn farms by an estimated 1.1 percent.