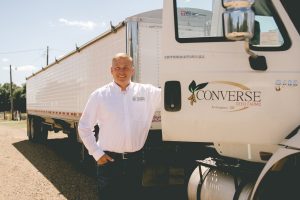 “That’s something that I’m going to cherish and take with me the rest of my life is just the great friends and connections of people that are working to better the farm economy in South Dakota and better our soybean production,” said Converse. “I just have truly enjoyed it.”

Converse has a keen interest in research that was honed while earning his undergraduate degree in agronomy from South Dakota State University (SDSU) before his first job in that field. “I worked one year out of college for a seed company in Wisconsin doing small-plot corn breeding research,” said Converse, who then returned to SDSU for his master’s degree, after which he worked for a Minnesota-based seed company. He then returned to Wisconsin to manage a seed research facility. “That’s where my research background comes from.”

Converse came back to the farm in 2008, searching for ways to be involved in a commodity organization. He entered and won his category in the South Dakota Soybean Yield Contest. “That kind of gave me the introduction into the organization, [and I] got to meet some of the people,” said Converse. “And then they said, ‘hey, you know, we have this Young Leader Program; would you be interested in trying this, learning a little bit more about the soybean industry through the DuPont Young Leader Program?’ I said, ‘yeah, let’s do that, that sounds like a great networking opportunity and involved my wife at the time, and you know it was a great opportunity for her too, to learn about farming and the industry. And so, I did that the first year.”

Being part of that program, now known as the Corteva Young Leader Program, made Converse a member of the South Dakota Soybean Association Board. But armed with years of plant breeding experience and a master’s degree, Converse soon landed a spot on the South Dakota Soybean Research and Promotion Council Board. “With my research background that I had with SDSU, my skills are better served working on the council than the association,” he said. “That’s what I did on the council, I worked more with the research and SDSU. I worked on the North Central Soybean Research Program using my skills and my background in research to better the soybean farmers in South Dakota.”

As he nears completion of three three-year terms on the South Dakota Soybean Checkoff Board, Converse is grateful for personal growth in soybean production and marketing, “understanding the global economy of the soybean markets, working hard to create new demand for our products here in South Dakota,” said Converse, “as well as increasing yields and productivity.”

Among other things, Converse’s board highlights include the establishment of the Hungry for Truth consumer engagement initiative, directing Checkoff funding for research to increase soybean protein content, and being part of the See for Yourself tour that allowed him and other growers to see what happens to soybeans once they’re delivered to the elevator. The trip also helped determine what foreign customers need from U.S. soybean growers. “Bringing that message home to continue to work towards producing a sustainable product that’s good quality; that’s what the world needs, that’s what the world wants, and I think that’s going to give us an edge over our competition in other parts of the world,” said Converse. “We’re producing an excellent quality product that the world needs.”