No Time to Rest

Farmers frequently breathe a sigh of relief when their soybeans are in the ground and have started to grow. By mid-summer, soybeans are well on their way to reaching their maximum yield potential. But that doesn’t mean farmers can drop their guard.

Scouting and mid-season management are important practices to carry out throughout the growing season. By July and August, farmers should be in their ﬁelds and on the lookout for pests that could rob yield. 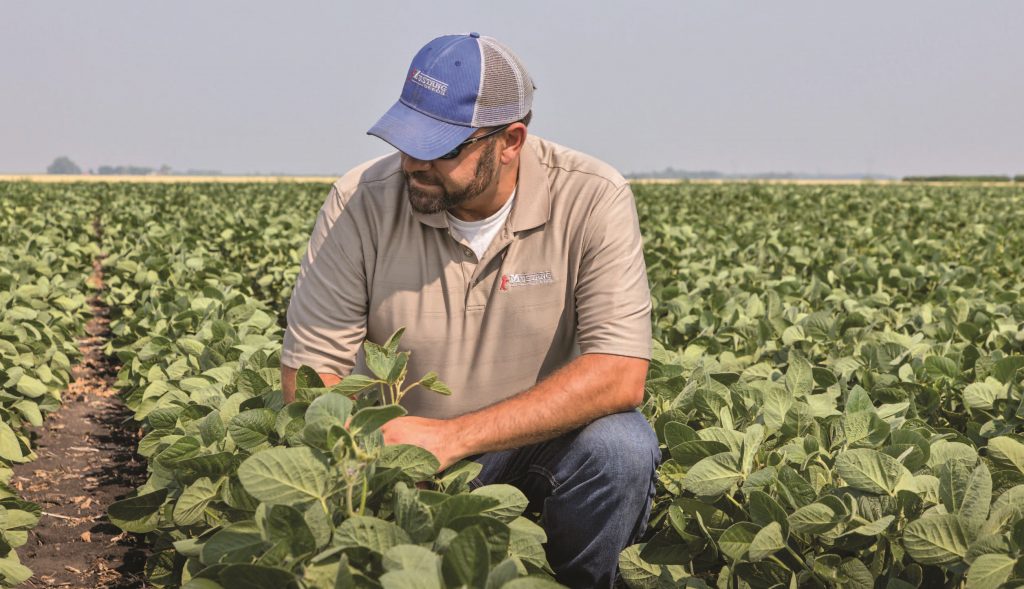 Seasonal Analysis
Pre-emergent and residual herbicides have likely lost their effectiveness by this point in the season, so farmers will turn their sights to post-emerge applications. Schultz says scouting is vital to help farmers identify weed infestations as well as the soybean’s development stage as it can dictate how farmers approach weed control.

“Most labels prohibit spraying after R1 due to soybean blooming and reproduction in order to prevent yield loss,” Schultz says.

“Not only can farmers rate the efﬁcacy of their weed management program, but also the crop response to the program they went with.”

Farmers can also determine the timing and need for insect and fungicide spraying. Schultz says summer is a good time to scout for white mold and several other plant diseases. Wet soils, prior to and during ﬂowering as well as damp conditions, a dense canopy and past disease history in that ﬁeld may factor into a farmer’s decision to spray fungicides to combat possible issues with white mold. Soybean aphid populations also help farmers decide if and when insecticides are needed to keep the pests under control.

Eyes on Next Year
The effectiveness of soybean variety choices made by farmers will also become much clearer by mid-season. Yield potential is still unknown and will be impacted by weather, but farmers will be able to better understand how the varieties they planted are performing in the ﬁeld. Schultz says it will be apparent if the varieties farmers have planted are equipped to resist or at least tolerate soybean pests and diseases.

The information farmers gather from scouting this year’s soybean crop can be extremely valuable in making plans for future growing seasons.

“Farmers will be able to learn a lot about variety differences and how those varieties respond to soil types and management practices on speciﬁc ﬁelds and or regions in which they farm,” Schultz says. “They can learn what has gone wrong and what needs changing for next season.”

Schultz says it’s not just problems that should become apparent, so too, are instances where farmers got it right.

“Growers should also be able to recognize the good decisions they made on the current year that they may want to incorporate into next season’s planning. That includes their tillage practices, whether they should no-till, what populations to plant per acre, iron deﬁciency chlorosis and placement of crop protection products,” Schultz says.

If farmers are willing to get out and scout, their soybeans can tell them a lot without speaking a word.

To learn more about what Mustang Seeds has to offer, visit mustangseeds.com.