No-till is just the beginning

Since Lewis Bainbridge stopped tilling his fields more than 25 years ago, it’s been “continuous improvement,” according to the Ethan, South Dakota farmer. 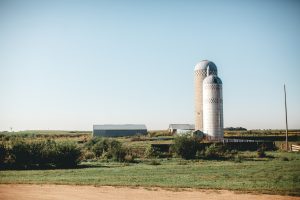 “We’ve been at it a long time and have no reason to change,” he said.

Though he’s retired from farming now, his sons Matt and Neal still reap the benefits of what their father began decades ago.

One big improvement that comes from no-till: “You have incredible water infiltration,” Lewis said.

That’s a benefit in wet years and dry years, and the Ethan area has experienced both extremes in recent years.

“It’s doing what it’s supposed to do,” she said. “It’s holding water, and it’s readily available for the plant when needed.”

Rients has worked closely with the Bainbridges over the last decade as a Resource Unit Conservationist at the Natural Resources Conservation Service in Mitchell.

Reducing tillage is often the first step farmers take on the path to healthier soils. That one move hits on many of the five principles of soil health, Rients said. 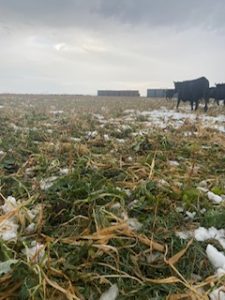 “With a no-till system, you need to think more diversity to combat disease,” Rients said.

“No-till is a perfect way because you’re leaving more out there for livestock to graze,” Rients said.

There are trickle-down benefits, too. By holding onto water in the soil profile, it’s reducing runoff into creeks and lakes, Rients said. Nutrients stay in place. It mineralizes nitrogen, immobilizing it so it’s available for the next crops.

“That’s a profitable win for a producer,” Rients said.

The amount of phosphorus the Bainbridges apply has dropped between 25 and 50%, Matt said.

The benefits of no-till just keep rolling in. The longer fields go without tillage, the healthier the soil biology, according to a recent study by South Dakota State University study that compared conventional tillage with short-term no-till of three to five years, and long-term no-till fields like the Bainbridges’.

“It will show some benefits in a year, but it’s going to take time,” Rients said. “It’s more than just not tilling. It’s a system.”

Lewis is thankful that his dad was open to new ideas all those years ago.

“It just got to be a whole lot of tractor time and a lot of work,” he said.

Many farmers today hold down full-time jobs off the farm, so the time savings is huge, Rients said. Making fewer passes through the field is easier on the soil, too. It decreases compaction and saves on fuel.

Starting out with no-till, Lewis didn’t have the tools his sons do today. 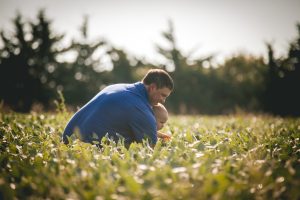 Those tools include equipment such as specialized planters, as well as other soil health builders like cover crops. They can make it much easier for farmers to get started on the path to raising crops with minimal soil disturbance.

The Bainbridges have found having the right tools makes field work easier.

When they first started planting no-till fields, they would fill the insecticide boxes of their old planter with gravel to help maintain the downward pressure needed to plant through stubble. Now Matt and Neal Bainbridge enjoy running a newer planter with attachments built for the job.

“Those planters are made to plant no-till,” Matt said.

There are equipment costs upfront with no-till, but overall it requires less equipment and smaller tractors, Rients said.

Cover crops are another tool that helps transition to no-till. When the Bainbridges switched to no-till, they had some years of planting in not-so-great soil conditions, Matt said. Cover crops can help use excess moisture and build soil structure that can keep the planter rolling when the ground is wet.

“Now that cover crops are mainstream, a person can adapt to no-till a lot quicker,” Matt said. 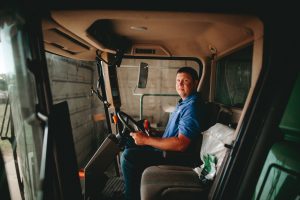 When the Bainbridges transition a newly rented field to no-till, they typically plant wheat first, followed by a cover crop.

“We put some different roots in the soil that haven’t been there in a while,” Matt said. “We try and get ahead of the transition.”

Lewis started his switch to no-till by planting corn into soybean stubble because it was the easiest to work through.

Some tips he’s found: make sure you spread the crop residue adequately. Make sure your disc openers are good and your planter is tight.

“Because you only have one shot at it,” he said. “We’ve kind of refined it over time and keep trying to do better.” 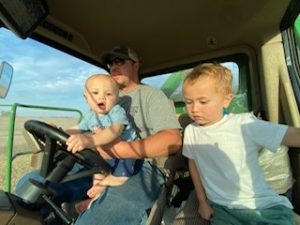 Rients said she appreciates that the Bainbridges are willing to try new things. They’re great record keepers who are constantly learning from what they do, she said, and they’re willing to mentor others who want to improve the health of their soils.

“They know that you don’t just stop at no till,” Rients said. “There’s more to do, and it’s benefiting their land and their resources.”

Rients encourages farmers to use NRCS as a resource. She and her colleagues work with farmers on a voluntary basis to help them inventory their land and identify resource concerns they might have. They can help track down financial assistance, too.

“Just give it an honest try, even if just on a couple fields,” Matt said.

For the South Dakota Soybean Association