Thanks to drought in parts of South America, the global soybean balance sheet has gone from overburdened to tight in a couple short months.

When writing the last article for the Soybean Leader in December, projections for crops out of South America were mammoth. Yet, as we’ve seen all too often, weather the last half of December and first part of January can make or break a Brazilian soybean crop. For the month of December, key soybean production areas of Rio Grande Do Sul and Parana saw 27-34% of normal precipitation. In January, both provinces saw around three-quarters of normal precipitation. Combined, the two account for 30% of the total Brazilian soybean crop. On the February WASDE, the USDA lowered the Brazilian soybean crop to 134.0 million metric tons (MMT) vs. 138.0 MMT last year. However, it was the Brazilian state forecaster CONAB which stole the show in February, cutting their estimate of the country’s soybean crop to 125.0 MMT. This should portend additional cuts by the USDA on subsequent WASDE reports.

At the time of this writing, the Argentine soybean crop was still up in the air but looking to come in as the smallest in four years. To round out South American production, Paraguay was also staring at the smallest soybean production since 2011/12 as it dealt with its own production issues. To get a sense of the true available supply to the globe, we often like to combine the major exporters into one balance sheet. Once Argentina, Brazil, Paraguay and the United States are combined into a single supply and demand table, we see the smallest total supplies since 2017/18. Global demand, however, at 316.781 MMT is the largest on record, just besting last year’s by less than one million tons. This yields ending stocks of 53.6 MMT, the smallest since 2014/15. The stocks/use ratio of this group tallies 16.93%, the lowest percentage since 2011/12.

This global supply and demand situation holds large implications for planting intentions in the United States this spring. Early estimates point toward an additional 1-2 million acres of soybeans being planted in the U.S. That said, current economics are favoring corn in many parts of the central corn belt. In addition, as the planting data from the 2021/22 marketing year showed, there are not an abundance of free acres to be had with the current marketing year featuring a relatively low 2.1 million acres of prevent plant. Even accounting for planted acres two million above 2021/22, and normal growth rates in demand, carryout projections on soybeans for the 2022/23 marketing year struggle to get above 300 million bushels.

Corn, soybeans and spring wheat all need acres to maintain or build comfortable balance sheets in the coming year. A host of issues from geopolitical tensions, high priced or scarce inputs and moisture concerns are all playing into producer decision making. This year’s acreage battle could come down to the wire and risk premium will have to be maintained throughout. 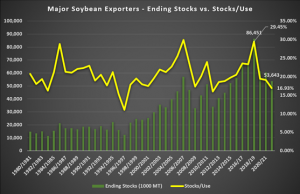 Major exporter ending stocks of soybeans are projected to slip to the smallest since 2014/15 at a time of record global demand without any further cuts to South American production.