For McCranie, ‘running out of calendar’ put a halt to soybean planting

It was late June before Mike McCranie decided he’d about finished his soybean planting for 2022. That’s not to say he planted all the acres he intended but was mulling whether to try to get any more soybeans into the ground. “I don’t know,” he said, “it’s getting to a point where we’re running out of calendar.”

Fieldwork issues for McCranie, from Claremont, in northeastern South Dakota, began with a wet fall harvest, but then very little show through the winter. “When March came along it looked like, my goodness, we were going to have another easy planting season, fencerow to fencerow,” said McCranie, a director of the South Dakota Soybean Research and Promotion Council. “Low and behold, it started raining and just didn’t quit.” 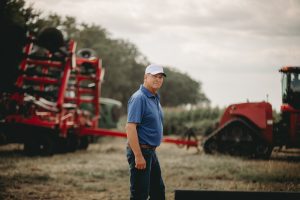 The result was that only half his intended soybeans were planted. What wasn’t, he says, will be declared prevent plant and remain fallow. “You’ve got to combat the weeds one way or another so actually, if we fallow it, we need to come back in with some sort of a cover crop,” he said, adding. “Cover crop works the best, and if you can plant a legume to put some nitrogen out there, even better.”

On the fifty percent of the acres that were successfully planted, McCranie is pleased with its emergence. “Well, we’ve got terrific stands,” he said. “The low-lying areas, soybeans do not like wet feet so I’m spraying right now and in those wet areas, they are stunted. The best-case scenario for those areas is hot and dry.”

The rain that slowed McCranie’s planting ended for a time when he was getting close to ending his planting season. “And so that’s enabled us to get a lot more beans in than we thought we were going to get,” he said. “The heat the other day was a killer; normally you don’t get 102 and 103 in the middle of June.”

McCranie’s bottom-line expectations for the season are somewhat tempered because of weather issues. “We know that we’re not going to get the yields that we normally get. We’ve gotten to a situation where a lot of times we’ll plant soybeans ahead of corn. We don’t like to do that very often. The best-case scenario is if you can actually plant them both at the same time. Those beans that were planted real early, they look fantastic, but now the ones that we were just planting on wetter ground, like I said, yield-wise, a home run would be 40 bushels [to the acre],” he said, “but I don’t expect that.”