Farming Goes to the Movies

Farmland is the new movie taking the country by storm following its debut at the Tribeca Film Festival in New York in April. This beautiful documentary about agriculture is the story of six young farmers who represent farming today across America.

One of the farmers is Ryan Veldhuizen from Edgerton in southwestern Minnesota. He is a fourth-generation farmer who is taking over the operation of his family’s hog farm with his brother and sisters.

Farmland made its South Dakota premiere on May 1 at the Century East at Dawley Farms theater in Sioux Falls. The Veldhuizen brothers attended and took questions after the show. More than 500 people attended. 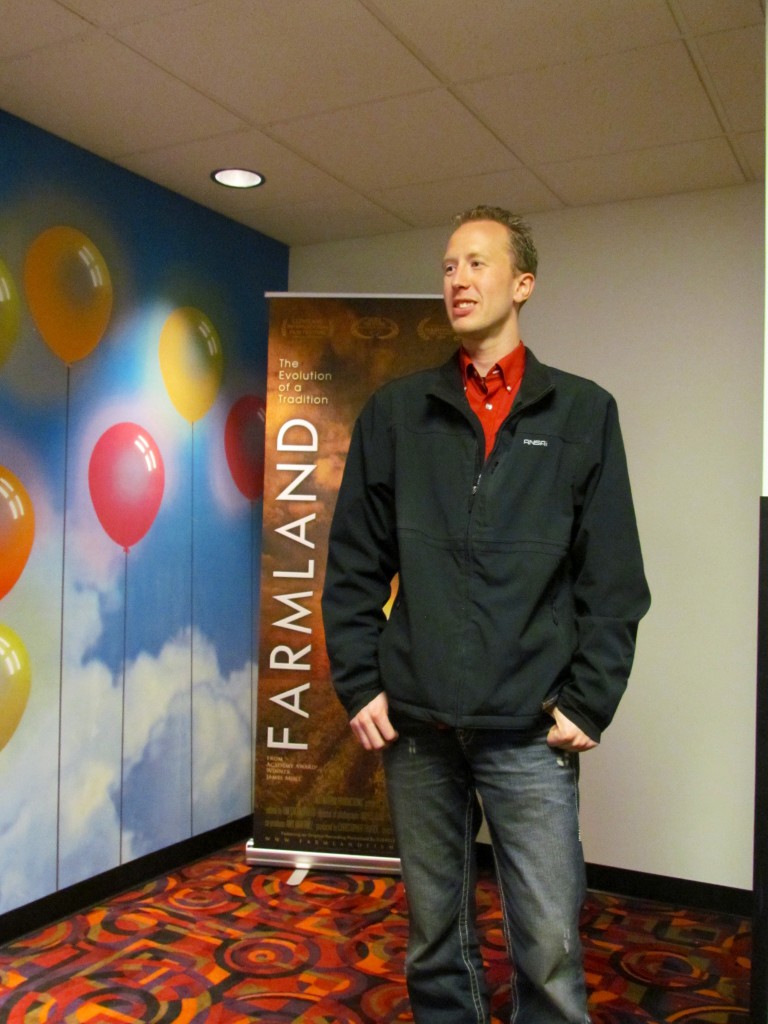 “I hope viewers come with an open mind and realize that people – family farmers – grow their food. We have the same struggles every one else does. I hope they come and see that the six of us in the movie are baring it for all to see, and I hope people see that they can trust us with what we’ve showed them about our farms,” stated Ryan.

Farmland was produced by award-winning Hollywood director James Moll. His work as a documentary filmmaker has earned Moll an Academy Award, two Emmys and a Grammy. His company, Allentown Productions, has also produced numerous programs for television as well as web-based content.

The movie was supported in part by the U.S. Farmers and Ranchers Alliance, an affiliation of agricultural organizations, including the soybean checkoff. It gives viewers an up-close look into the lives of the six young farmers and their families. It demonstrates the high-risk/high-reward nature of farming and their passion for the land and the lifestyle that has been passed down from generation to generation, yet continues to evolve.

Ron and Ava Christians, along with their son and daughter-in-law, Lee and Dawn, and granddaughters Madison and Reese attended the premiere. “It made me proud to be a farmer and know that so many of us are out there trying to help educate,” said Ava. “It is true scenarios of how reliant we are on the weather and how it impacts everything we do.” Ron added, “It was so great to see the young generation jumping into the family farms and the industry. We need them.”

Ryan Veldhuizen recounted that his involvement in the movie started when his family was selected as the 2013 Minnesota Pork Board Family of the Year. After that, Moll’s production company contacted his family multiple times before they entertained the idea to hear them out. After talking to Moll, the Veldhuizens decided that they wanted to participate in showing the consumers the truth about farming.

The family was then entered into the running with other young farmers from across the country for final selection for the film. In February, they learned that they would be “movie stars,” and filming began in March.

“They followed me around doing what I always do; loading hogs, checking hogs, maintenance on machinery and farming,” Ryan says.
Other farmers featured in the Farmland movie are:
• Leighton Cooley, a fourth generation poultry farmer, who operates four farms in Georgia with his father.
• Brad Bellah, a sixth generation cattle rancher, who runs beef cattle operations in Texas and Colorado, including a natural beef herd.
• David Loberg, a fifth generation corn and soybean farmer in Nebraska, who runs the family farm with his mother.
• Sutton Morgan, a fourth-generation farmer from California, who grows, packs and sells onions and potatoes, and also grows melons, carrots, broccoli, cauliflower, lettuces, chard, kale and alfalfa.
• Margaret Schlass, a vegetable farmer in Pennsylvania, who farms on 18 acres and sells produce direct to consumers.

Learn more about Farmland at www.farmlandfilm.com/ and be sure to see the movie.