“It’s a milestone for farmers in this state. The incredibly wet weather we had the previous fall and in the spring of 2019 complicated planting for most farmers, and may have contributed to them meeting that milestone,” Jeff Zimprich, State Conservationist for the U.S. Department of Agriculture’s Natural Resources Conservation Service (NRCS) told an audience at the Ag Horizons Conference in Pierre.

NRCS inventories since 2004 show the use of conventional tillage has remained fairly level at about 17%. No-till percentage has grown from a 37% share of total cropping system use in 2004 to 50% this year.

“The increase in no-till percentage is coming from farmers who are moving from high-residue tillage systems to not tilling at all,” Zimprich said. “More farmers could well be moving in that direction because no-till is a key practice used with cover crops and crop rotations to regenerate and build healthy soils.”

A perception exists that wet soils need to be tilled to dry out for planting, but in 2019, a really tough year, fewer no-till acres went unplanted compared to full width tillage systems, including conventional tillage. Estimated unplanted acres in each cropping system in 2019 wereno-till, 20%; mulch tillage, 39%; reduced tillage, 38%; and conventional tillage, 27%.

Jesse Hall farms in Kingsbury County, where more than 100,000 acres were unable to be planted in 2019. His land has been no-tilled for more than 30 years, and he uses a three-way crop rotation with cover crops.“I was able to plant 91 percent of my crop acres,” Hall says.“Our cover crops used up the extra moisture, and their root base helped support machinery. Our soils are absolutely better to farm now with these soil health practices.” 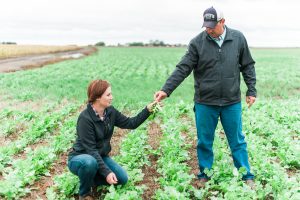 Like about everyone else, Brian and Jamie Johnson harvested in wet soils on their Spink County farm last fall. “We were never stuck, and rutting was minimal. We give a ton of credit to our small grains in rotation, no-till, cover crops, and cattle,” Jamie says. “It works for us. It’s profitable and sustainable.”

That kind of combination is gaining more favor across the state. More than 900,000 acres of cover crops were planted in South Dakota last year. Nine counties now have more than 30,000 acres of cover crops, and another 22 counties have between 10,000 and 30,000 acres. According to this recent NRCS Cropping Systems Inventory, 20 counties – mostly in central South Dakota – have more than 75% of their cropland under no-till systems.

The full Cropping Systems Inventory report can be viewed on the NRCS South Dakota website.

This article was provided by the South Dakota Soil Health Coalition and published in the Winter 2020 Soybean Leader.