Cover crops have been a big success in recent years. The weather has been wet and cover crops have helped use up excess moisture, shrink saline areas, reclaim Prevent Plant acres, increase soil organic matter, kickstart soil biological life and much more. 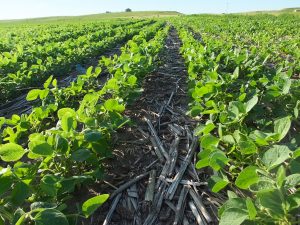 But now it is dry. Nearly all of South Dakota is in extreme, severe or moderate drought as this is being written. The remainder of the

state is categorized as “abnormally dry.” The drought is likely to persist through the spring and perhaps even for much of the year in some places, according to the latest projection from the Climate Prediction Center.

Three key questions when it is dry are: 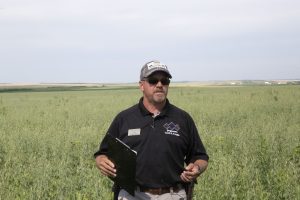 Bryan Jorgensen, Ideal, has a game plan for terminating cover crops. He has been using cover crops for about 10 years and is a founding member of the South Dakota Soil Health Coalition.
In wet years he likes to plant green, terminating cover crops right before or after planting corn and soybeans. When soils are wet, row crops plant better with a living root system in the soil, he says.
This year, though, if it is dry in April and soil moisture levels are still low, he will kill the cover crops several days or weeks before planting so the seed doesn’t have to compete with the cover crop for scarce moisture.
Cover crops have proven to be an excellent moisture management tool, notes Anthony Bly, South Dakota State University Extension soils field specialist, “and it is critical this year that we know when to turn them off.” 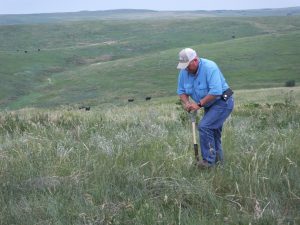 Cover crops planted in May and June for supplement forage should include some warm season grasses like sorghum, sudangrass and millet as these will produce more during the warm part of the summer, says Ruth Beck, SDSU Extension field specialist.
If a legume component is needed, consider cowpeas and/or forage soybeans. To extend the life of the cover crop into the fall, producers can add oats, triticale, wheat and a cool season legume species such as peas or lentils. Other crop species may also be included in the mix such as sunflowers, flax and brassica species, she advises. 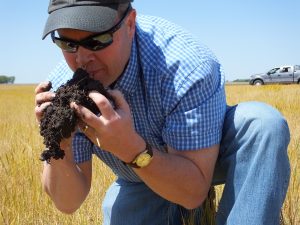 The drought’s intensity will drive most decisions about whether or not to plant cover crops after small grains this year. It is usually dry in late summer and cover crops after often planted in anticipation of moisture.
“Each operation’s going to be different as to how they handle risk,” says Miller, of the NRCS, who has served a large area of eastern and central South Dakota. “Some operations are willing to spend the additional money to put seeds in the dry soil on the hope they get moisture.”
Unless it is “ungodly dry,” Jorgensen will seed cover crops again this year.
He also plans to continue experimenting with interseeding cover crops in soybeans and silage corn during the summer, even though covers will use some moisture to get established.
“I’m more worried about soil loss than moisture loss,” Jorgensen says.
There’s little residue left behind after combining soybeans or chopping silage. “As soon as we fall behind [in maintaining surface residue and living root in the soil], the soil system starts degrading,” he says.
Arnie Harstad, farms at Wilmot, and also is a crop consultant and a South Dakota Soybean Association director. He puts himself in the “less accepting of risk” category when it comes to seeding cover crops in dry weather. That’s partly because he farms in northern South Dakota where a frost can come soon after small grains are harvested and cover crops are planted. He also doesn’t have livestock to graze cover crops.
If there’s time to plant cover crops and there’s enough moisture available to get them started, Harstad will try to increase his odds of success by reducing the seeding rate 25%; cutting the cover crop mix from five to six species to three to four, focusing on the easiest germination and fastest growing types; and using a drill to get the seed in good contact with the soil so that it will germinate faster.
“The good thing about cover crops,” he says, “is that there are so many options.”
But if it is too dry and/or too late in the season to get a decent cover crop stand established before a hard freeze, he won’t put the seed in the ground.
Chad Schooley, Castlewood, also a SDSA director, is more inclined to seed cover crops even if it is dry because he has livestock. He seeds a mix of frost tolerant turnips and radishes into volunteer oats to produce forage that his cattle graze throughout the fall and winter.
It’s surprising how much some cover crops can grow in the late fall if they get a little rain, he says. “I’ll definitely be ready to plant cover crops this year.” 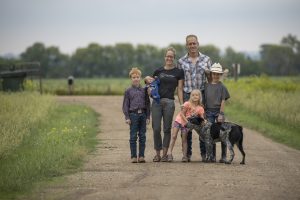 John Shubeck farms with his wife, Megan. They are pictured with their children. Photo USDA NRCS South Dakota.

John Shubeck, Centerville, is keeping cover crops in his plans, even though his farm is in the middle of one of the driest areas of the state. His average annual rainfall is about 26 inches. Only 14 inches fell last year. The drought category is rated “extreme.”
“I haven’t seen any local research that shows yields will be any less with cover crops than without cover crops in a long-term no-till system with a diverse rotation like I have,” he says. “Cover crops seem to conserve as much more as they use.”
There is some science behind the observation. Kris Nichols, a soil microbiologist who formerly worked with the USDA in Mandan, N.D., says it is because of the soil micro-organisms. A green, living cover crop feeds the micro-organism web in the soil much better than crop residue on the surface. Those organisms help form soil aggregate which increase the pore space between soil particles for water to flow through.
Another reason Shubeck plans to stick with cover crop is a philosophy that has served his family’s farm well, even in worse situations than today’s drought. The farm has been in the family for 147 years and Shubeck is the fifth generation to operate it.
“My dad always said, ‘Don’t try to outguess the markets or the weather. Stick with the plan.’”
It could start raining anytime and the drought may fade into the history books. Shubeck figures cover crops will help him make the most of whatever the weather brings in 2020.

The USDA Natural Resources Conservation Service (NRCS) South Dakota provides a composite cover crop species “Table 1” in their Conservation Practice Technical Guide. The downloadable table compares the properties of 43 different cover crop species. Ratings are made for their ability to limit erosion, increase organic matter, scavenge nutrients, promote biological nitrogen fixation and a dozen other characteristics. It can be found on their comprehensive “Resources for Cover Crops” Web page at www.sd.nrcs.usda.gov that provides information of a wide range of cover crop topics, from new species to insurance regulations. The NRCS also offers a Cover Crop Seeding Plan and Record as an Excel spreadsheet. Prepared mixes are now available. A vender tab for an easy report to give to their seed supplier, and a cost estimate is incorporated. See http://bit.ly/SDCoverCrops.

The South Dakota Soil Health Coalition has resources on its website. See https://sdsoilhealthcoalition.org.

For free, one-on-one personal consultation about cover crops, contact your local NRCS or conservation district office. NRCS helps all types of agricultural producers — conventional and organic, large and small, rural and urban — make investments on their farming operations and in their local communities to keep working lands working; boost rural economies; increase the competitiveness of American agriculture; and improve the health of our air, water, soil and habitat.

Published in the 2021 Spring Soybean Leader