The National Biodiesel Board’s new name, Clean Fuels Alliance America, is a rebranding of the organization that CEO Donnell Rehagen calls the group’s “next evolution.”

“We’re heading into an era of multiple clean fuels in our space, biodiesel, renewable diesel, and sustainable aviation fuel,” said Rehagen, about the change, “and so we felt like it was appropriate to broaden the brand that our name represents as well.” 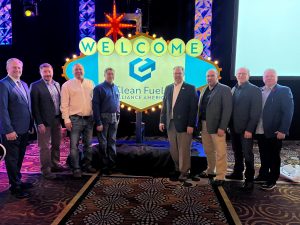 Shortly after formally presenting the new name during a National Biodiesel Conference General Session in Las Vegas, Rehagen recalled for reporters, when two years prior, during the conference in Tampa, the National Biodiesel Board launched a new vision. “And in that vision, we specifically said that we would grow through the use of biodiesel, renewable diesel, and sustainable aviation fuel,” he said. “For us, clean fuels speaks to all of those fuels and it speaks to all of those markets, so we’re excited about this opportunity to broaden that message and to talk more about the fuels that we bring to the marketplace.”

Rehagen was asked during the question and answer session with reporters whether the announced changes go deeper than a simple rebranding and new name.

“I don’t think we’re going to see a major change, I told everybody on the stage I said, ‘the family is staying the same,’” said Rehagen. “Now, we will be growing the family; as you know, there are new entrants into our industry that we haven’t seen, both in renewable diesel and sustainable aviation fuel, and so it’s going to be an opportunity for us to engage with those companies, invite them into our family, invite them into our industry and invite them to work hard alongside us.”

Among those three distinct fuels, Rehagen said it’s biodiesel that has laid the groundwork for decades to get and keep the renewable fuel afloat.

“In fact, this is the thirtieth year of the National Biodiesel Board, now Clean Fuels, that also coincided with it being thirty years for our industry because as you know, the National Biodiesel Board was there at the very beginning of forming this industry, so I think, moving forward, it’s just going to be a broader audience for not only the messages about our fuel but also the message about the work of the trade association and inviting more people into that message.”

The organization was developed with the help of the Soybean Checkoff, which has been part of the group’s evolution that began a couple of years after its 1992 birth.

“That’s when they changed the name from the National SoyDiesel Development Board to the National Biodiesel Board, so I think this is just the next evolution of that, and our friends in the agriculture industry understand that,” said Rehagen. “They’re very, very proud, rightfully so, of the role that they’ve played in getting this industry to where it’s at, and I think they’re pretty excited about where we’re going.”