China Brings The Demand Back to Grains

In a year dominated by coronavirus, grain markets were able to take advantage of the world’s largest consumer coming back to the table for imports. Spurred on by record, or near record domestic prices, China turned to the United States to help fill structural deficits in corn, soybeans and wheat. At the time of this writing, Dalian futures in China show corn at $10.97 per bushel, No. 2 soybeans at $17.76 per bushel and wheat near $10.00 per bushel. These prices and the chart below help illustrate the tightening grain situation in China. 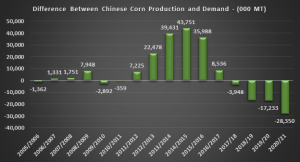 The chart shows the difference between Chinese corn production and Chinese demand. For 2020/21, the USDA is expecting this difference to be over 28 million tons which lines up quite well with most private estimates for total corn imports. The last several years, many focused on the burdensome stocks situation in China rather than the growing demand base. Data on stocks can be somewhat opaque, and moving forward, markets will be well served paying attention to the deficit or surplus between production and demand.

As noted above, the incredible global demand is being felt across all major grain markets. The pace of demand, especially for soybeans, has been so strong through the first six months of the marketing year that USDA will be forced to increase their estimates once again as early as the March WASDE report. 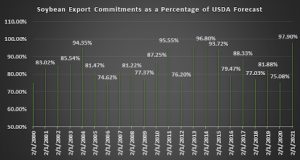 This chart shows soybean export commitments as a percentage of the USDA’s current forecast. As of the latest available export data on February 18, this ratio currently stands at 97.9%, which is the highest on record going back to at least 1990. Actual commitments on the books total 2.202 billion bushels which would be the largest export program in history if exporters didn’t sell another soybean the rest of the marketing year. Obviously additional business will be conducted the next six months making the USDA’s current estimate in need of revision. This should tighten carryout stocks even further, backing the market into the proverbial corner heading into the 2021/22 marketing year. It will be absolutely crucial the U.S. farmer produces trendline yields this coming season or balance sheets get untenable rather quick.

Adding another layer of intrigue for the grain space, as if one was needed, are rising inflation expectations as governments around the world try to monetize their way out of the slow economic growth caused by the coronavirus. 5-year breakeven inflation expectations are now over 2.3% which is the highest since 2013. Demand for physical assets as a hedge against inflation is becoming a popular trade, something which should keep speculative activity in grains high. Demand from all sectors appears strong and should support grain prices as we get set to start another growing season.

Published in the Spring 2021 Soybean Leader.