The South Dakota Soybean Checkoff is partnering with Goodyear Tire to donate soy-based tires to 50 South Dakota sheriff’s departments, as well as to the South Dakota Highway Patrol and other state agencies. The partnership underscores the tire company’s relationship with farmers and with first responders, according to Carly Bishop, government account manager for Goodyear Tire.

“Goodyear values our strong bond with law enforcement agencies because they’ve been a huge fundamental part of Goodyear’s core values since the company was started,” said Bishop. “We really want law enforcement officers to be on the best product with the best technology to make sure that they are as safe as possible in their jobs.” 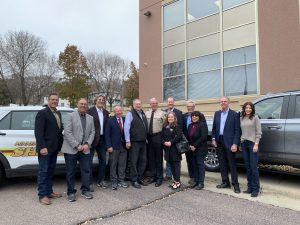 During a news conference announcing the donation, United Soybean Board Secretary and Toronto, South Dakota farmer David Iverson said the soy-based tires are another in a long line of bio-based products manufactured from soybeans.

“What a great win for all of us to have sustainably-grown product replacing petroleum,” said Iverson, referring to soybeans, “a product that we grow a lot of here in South Dakota.”

“The interesting thing is, a lot of these ideas originate with farmers,” said Jerry Schmitz, executive director of South Dakota Soybean. “They’re the ones who have the ideas; they don’t know how to accomplish it but work with companies like Goodyear and other industry partners to achieve the goal of a new use for soy.”

To some in law enforcement, the relationship resulting in the soy-based tire donation goes beyond just saving money. “The partnership between Goodyear and the Soybean Checkoff is awesome,” said Mike Milstead, sheriff of Minnehaha County, during the news conference. “I can tell you my deputies appreciate it, I appreciate it, the citizens certainly appreciate it, because you saved us some tax dollars on buying tires.” 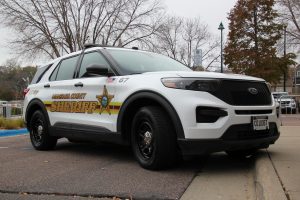 Sheriff Milstead admits to being persnickety about the tires on Sheriff’s Department cars, but that the donated tires fit the bill. “The [Goodyear] Eagle Enforcer All-Weather, they’re pursuit-rated,” he said, “but the other thing is, they’re all-weather; it works for us in the winter, it works for us in the summer,” meaning there’s no need to change tires back and forth, depending on the season.

“It’s a great way for us to see that our farmers support us and that we’re able to support them,” said Milstead, referring to the Soybean Checkoff donation and the protection of people and property in rural areas of South Dakota provided by the sheriff’s departments, “because we’re going to be the ones out there responding to calls in those communities.”

“There is a cost saving, but the emotional boost for me and my staff,” said Milstead, “that’s also greatly appreciated.”

A former South Dakota Soybean Board Member pointed out during the news conference that the use of soybeans in the manufacture of everyday items supports soybean demand. “We’ve all lived through tough years where prices were high and then prices were low,” said South Dakota Governor Kristi Noem, who served in 2003 as South Dakota Soybean’s Young Leader recipient. “Adding diversity to what we can use the products for stabilizes that and makes sure that they always have a price that will help cover the risk that they take every year when they go borrow money and buy seed and put it in the dirt and hope it rains and something grows.” 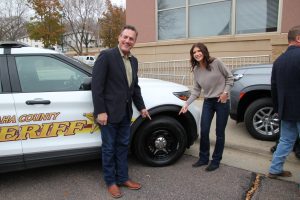 While acknowledging that the tire donation is an assist to 50 South Dakota sheriff’s departments, Governor Noem said the Goodyear tires made from soybeans are a benefit to farmers. “Adding this new market for what they do every day is incredibly important in making sure that they stay out there,” said Governor Noem, “and they’re able to raise their families here in South Dakota.”