It’s hard to resist the lure of big numbers on the yield monitor. High soybean yields are a good thing for South Dakota farmers, but soybean quality is taking on increasing importance. Soybean industry leaders are pressing the issue because quality ingredients are what soybean end users want.

“The emphasis comes from our end users, both domestic and international,” Iverson says. “The protein and oil content of our soybeans is currently not as competitive as those from other parts of the world.”

Farmers may be growing soybeans, but they’re really producing nutrition for animals, food for people and oil for food and industrial uses. It’s high quality meal and oil that processors and feed manufacturers want. That’s why soybean industry leaders are pushing farmers to consider more than bushels when growing soybeans. U.S. soybean meal competes not only with other feed ingredients like synthetic amino acids and dried distiller’s grains, but also with other soybean suppliers, including South American farmers.

“When we talk about soybean quality to producers, we are focused on oil and protein,” says Kari Vander Wal, soybean procurement manager for South Dakota Soybean Processors (SDSP) in Volga. “The goal is to raise a soybean with a minimum of 35 percent protein and 19 percent oil. The soybean meal market trades a 47.5 percent protein product, so we need to be competitive in that market to provide soybean meal to livestock producers, since livestock consumes almost 97 percent of U.S. soybean meal.”

Increasing soybean quality would help farmer’s bottom line. A checkoff-funded study shows that if soybean farmers increased the protein content in their soybeans by one percentage point, they could earn an additional $7.70–$12.96 per acre. 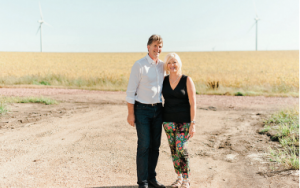 The formula used to determine soybean quality for the contest is the same one used by South Dakota Soybean Processors (SDSP) in Volga. Vander Wal says SDSP develops an estimated processing value (EPV), calculated from the crude oil and crude protein, on every load of beans that is delivered. The crude oil and protein values in the soybean are translated to the value of the finished meal and oil product shipped out.

The crude protein and crude oil in the beans is a standard grade that SDSP completes and then provides the results back to the farmer. Northern-grown soybeans typically contain lower protein and oil, in part, because of the shorter growing season. Vander Wal says SDSP has worked for years with farmers and seed companies to increase the protein in the beans farmers grow.

“Transparency is good. We should get a premium based on what we grow,” Iverson says. 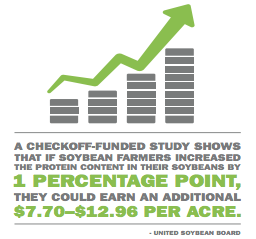 Iverson says farmers still get paid based on crude protein, even though it is an elementary benchmark for soybean quality. Farmers in South Dakota, North Dakota and Minnesota have teamed up to promote essential amino acid content as a better measure of a soybean’s true feed value.

“We’re trying to tell our customers they’re getting a better deal when they buy our soybeans because of the essential amino acids,” Iverson says. “The standard is still crude protein, but it would be a win for South Dakota soybean farmers if amino acid content would become the standard.”

A challenge for soy industry leaders is to get farmers to look beyond what they’ll get paid at the local market and pay more attention to the needs of the end user. The pricing system for U.S. soybeans compensates farmers for higher quality through their basis. The system isn’t transparent, however, and many farmers don’t know this is happening.

“Processors are checking for quality. I’d like to see the local elevators testing to help show farmers that there is a difference in seed,” Iverson adds. “Right now, we dump our beans and ask what the local price is on the board.”

Seed selection is the primary way to impact oil and protein content. Farmers can learn more about seed quality potential by reviewing variety information for more than yield potential.

“Yield is still what the grain industry pays the farmer for,” Vander Wal says. “We always encourage producers to select varieties on their agronomic needs, then do the fi nal selection on oil and protein on close decisions between varieties.”

“If farmers ask their seed dealer for higher protein and higher oil varieties, that will move up the chain,” Iverson says. “We can push quality from both sides with USB pushing for it on one end and farmers asking for it on the other.”