The charter bus turned down the dusty gravel road and came to a stop just outside the gate of Matt Bainbridge’s cattle pasture west of Ethan, South Dakota. The passengers slowly trickled off the bus, weary from several days of travel and many just waking from brief catnaps they caught between destinations.

The riders, representing a number of livestock producers and soybean users from the Philippines, stepped off the bus on a sun-soaked South Dakota afternoon into a world very different from what they left behind, yet closely tied to their own.

The delegation listened to Bainbridge talk about his farm, took selfies by the herd of black Angus cattle, then hopped on the bus again for a short half-mile jaunt to one of Bainbridge’s slowly ripening soybean fields. 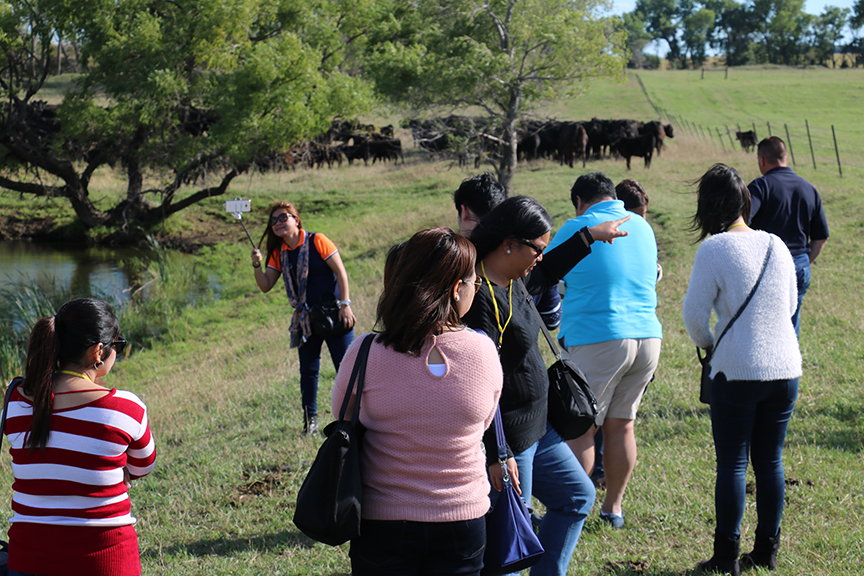 Wading into the edge of the hip-high soybean field, Bainbridge told about the growing season, the crops’ yield potential and his farming practices. After the in-field discussion, a group photo and another short bus ride, the team arrived at the Bainbridge Farm’s yard. After snapping photos of farm equipment and Champ the canine welcoming committee, delegation members filled long tables in the freshly swept machine shed for a hearty barbecue dinner.

Welcome to the real world of international market development.

The South Dakota Soybean Research and Promotion Council (SDSRPC) hosts numerous trade teams each year from countries all over the world. Soybean buyers, brokers and end users often want to see for themselves how the crop is produced and how it’s progressing. They want to familiarize themselves with the processes that bring soybeans from the field, to the grain elevator, to ports and eventually to their facilities, often half a world away from South Dakota. They also want to meet the farmers. 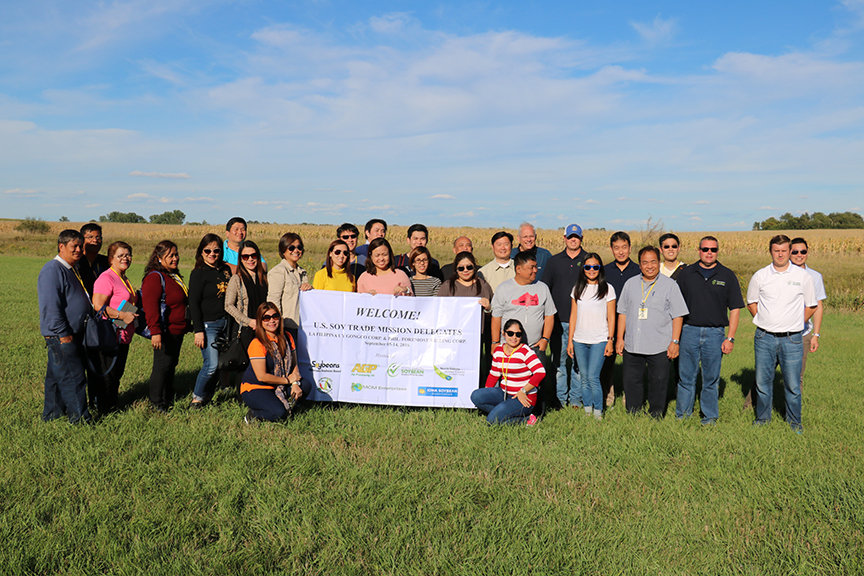 The Philippine group that visited in September was no exception.

“The relationship with the farmers is very important because the end users see the farmers who own the business,” says Marie Marte, owner of Philippines-based M.C. Marte Enterprises, which helped coordinate the trade team. “The farmers implement measures from the heart. It’s not just a commercial operation. They put everything into it so they will produce quality soybeans.”

Bainbridge has been on both sides of trade delegations, having traveled overseas to meet with buyers, processors and end users in addition to hosting visitors on his farm. It’s an important part of the international marketing process.

“We put a face to the product,” Bainbridge says. “They can see our farms, see how we operate and how we grow the soybeans. I think it does have a big impact because when it’s time to buy soybeans or soybean meal, we want them to think about us.”

The Philippine delegation visiting Bainbridge’s farm came at the invitation of La Filipina Uy Gongco, the largest buyer of soybean meal in the Philippines. Most of the participants were soy end users including several large swine, poultry and aquaculture farm operators.

Trailing only Mexico as the top importer of U.S. meal, the Philippines purchased about $362 million worth of soybean meal in 2015. La Filipina buys exclusively U.S. soybean meal, equivalent to 11.5 million bushels of soybeans. That’s about 5 percent of South Dakota’s entire annual crop.

“This trade team visit is a great example of a success story that came about because of the soybean checkoff and our international marketing projects,” Freking says.

The SDSRPC supports efforts like AGP’s Grays Harbor project in Aberdeen, Washington, which made reaching Southeast Asian markets more efficient. Since about two-thirds of South Dakota’s annual soybean crop is exported, much of it through the Pacific Northwest and Grays Harbor, those investments are yielding returns for the state’s soybean farmers.

The Philippine delegation spent a week in the United States, visiting farms, touring grain elevators and seeing the Port of Grays Harbor, from where many of their soybean meal shipments originate. Understanding the logistics and process for moving grain from the farm to the end user is valuable, but so too is relationship building.

“It’s very important for us to get a chance several times a year to meet our best customers, invite them to our farms and have them see for themselves how we raise the crops that end up in their livestock operations,” Freking says. “It’s no different than doing business on Main Street America. We develop personal relationships with our customers. It’s just good customer service.”

Meeting the farmers themselves and understanding how farmers grow soybeans provides assurances to customers that South Dakota farmers can be reliable, sustainable and long-term soybean suppliers. 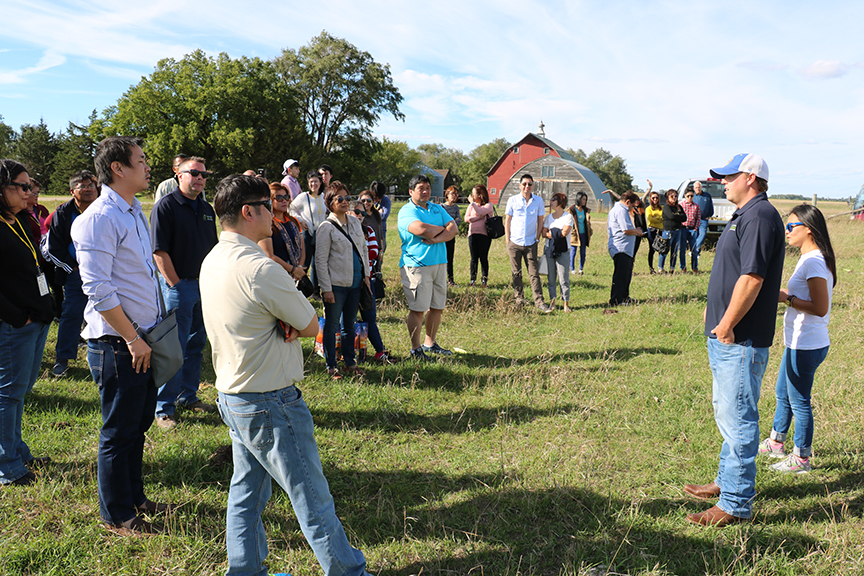 “It’s a really competitive world out there,” Bainbridge says. “Our customers can buy soybeans or soybean meal from anywhere, so if we have a chance to build relationships with them, then we know we’re not going to be the last place they look. Maybe they’re going to shop around on price, but if our price is comparable and they know the quality they’re going to get, that gives us a really good opportunity to make sales.”

Trade policy and trade agreements are important components of international market access. But, in many cases, successful business relationships are much more personal.

“These visits are high impact, not only because these end users are able to see things for themselves, but they’ve also made friends,” Marte says. “With that friendship comes trust and eventually they become regular buyers.”