Fish is one of the most widely grown and consumed proteins in the world. According to the National Oceanic and Atmospheric Administration, the United States is the leading global importer of fish and fishery products with 91 percent of the seafood consumed originating abroad, and fish farming produces half of that seafood. Driven by imports, the U.S. seafood trade deficit has grown to over $11.2 billion annually.

Although a small fish producer, the U.S. is a major player in global aquaculture, supplying a variety of advanced technologies and feed to producers around the world. Soybean meal and advanced soy proteins are primary ingredients in many fish diets displacing fishmeal, which is expensive and increasingly less available.

“A great deal of research is done globally through the soybean checkoff to increase the use of soy in aquafeed,” says Bridget Owen, past executive director of the Soy Aquaculture Alliance. “That’s important for soybean farmers and fish farmers, too.” 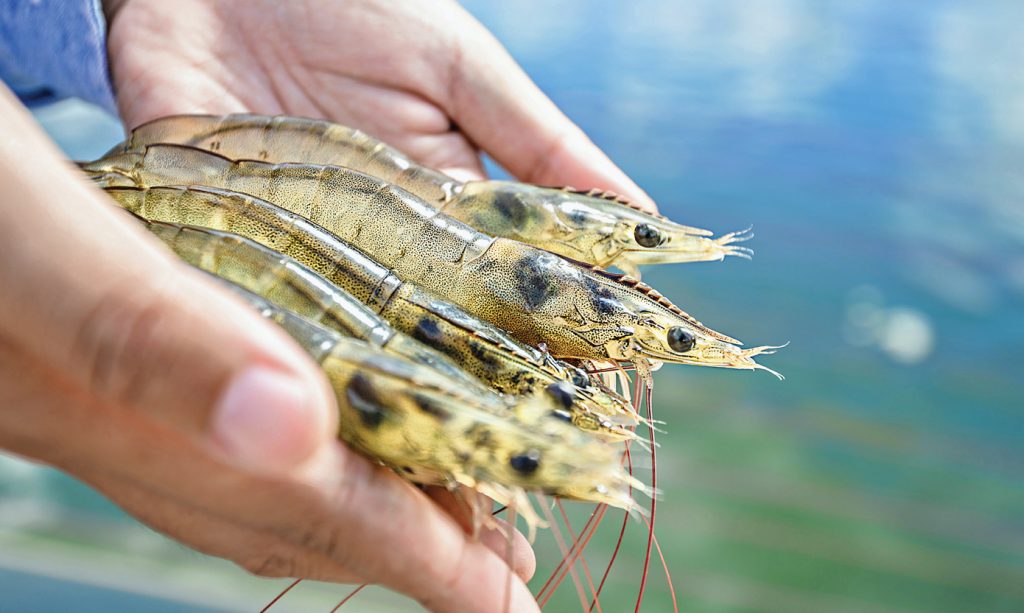 “Aquaculture is growing faster than the rate of human population growth, so we will need sustainable sources for aquafeeds,” Owen adds.

Tru Shrimp Systems, a business unit of Marshall, Minnesota-based Ralco Nutrition, is in the process of siting an expected nine-acre facility to produce Pacific white shrimp. The $54 million facility is likely to be built in Minnesota, near the South Dakota border.

“Minnesota, eastern South Dakota, northwest Iowa: This is the epicenter of commodity production,” says Tru Shrimp Systems General Manager Michael Ziebell. “Shrimp are fed a variety of commodities and the foundation is soybeans. We have the largest supply of soybeans and other commodities at the lowest price anywhere in the world. So, this is the most natural place to do it, to bring the shrimp to the feed.”

Elk Point, South Dakota, farmer Doug Hanson is enthused about the potential aquaculture offers for soybean consumption. Hanson was a representative on the Soy Aquaculture Alliance for several years and is a vocal proponent of aquaculture.

“I’m excited about the possibilities,” Hanson says. “I think in a few years, we will produce domestic seafood on a much larger scale.”

Domestic, inland fish production may still be in its infancy, but the opportunity is encouraging.

“Domestic aquaculture is really the only brand new ag industry that will consume soybeans,” Hanson says. “Soybean prices have gone up and down for decades depending upon livestock needs. Aquaculture will give us a new line item for soybean use. I think it’s only going to grow.”

This blog post is brought to you by the South Dakota Soybean Research & Production Council.