The impact of South Dakota State University’s (SDSU) new state-of-the-art Swine Education and Research Facility will likely be felt by more than the state’s pork producers.

In October, SDSU opened the doors to the on-campus facility that has been several years in development. The facility is designed to host teaching, research, extension and outreach activities. A 45- seat classroom, observation corridor, gestation room, farrowing rooms and surgery suite provide opportunities for instruction and research.

“With the growth of the swine industry in the region, there is a lot of demand for educated, well-trained employees,” says Joseph Cassady, SDSU animal science department head. “This facility will allow us to turn out those kinds of students.” 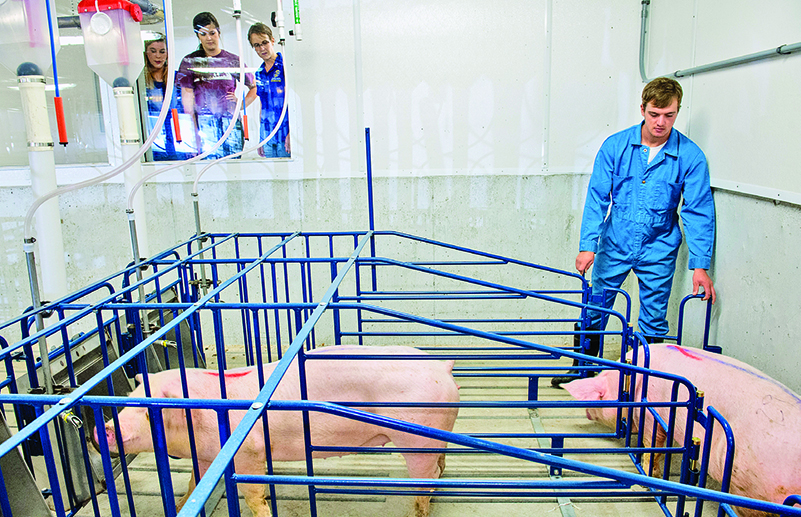 The new facility includes an observation room to give people of all ages a look into modern hog farming.

Cassady says many of SDSU’s swine research barns were older and no longer represented what could be found on most modern hog farms. The new facility is more representative of what modern barns look like.

A wide range of groups recognized the need for enhanced facilities at SDSU and stepped up to help support the education efforts. Pork organizations from South Dakota, Iowa and Minnesota were among those that contributed to the project. The South Dakota Soybean Research and Promotion Council (SDSRPC) was one of the leading supporters, investing $1 million.

“The Council saw this as a very important project,” says Marc Reiner, farmer from Tripp, South Dakota, and SDSRPC chair. “One of the things we work to do is increase demand for soybeans. The number one customer of soybeans in South Dakota is the pork industry. Getting the Swine Center going will help the pork industry and help South Dakota farmers sell more soybeans.”

Cassady says the number of SDSU students pursuing animal science degrees has doubled in the past 12 years. The new facility will give students hands-on experience in many facets of pork production. Giving students and the public a true picture of hog production was a major factor in the design of the swine education center. One of the most prominent features of the building is the observation corridor that allows students and the public to see inside an operating hog barn without compromising biosecurity.

“This allows us to bring in anyone from kindergarten classes to local zoning boards and politicians who are interested in learning about the swine industry,” Cassady says.

The Swine Center will be an invaluable resource for teaching future hog industry workers. It will also be a tool to educate the next generation of decision-makers.

“This facility is just as important for students who won’t end up working in the pork industry,” Cassady adds. “They can still come in here and see what happens in a modern hog barn. In the future, they’ll be part of the citizenry, maybe even as leaders of groups like local zoning boards. It’s important we help educate them so when they’re in that role, they can make informed decisions.”

Construction of the new facility was made possible by regional support and collaboration. For soybean industry leaders, the value was obvious.

“Exports are good and they’re very important, but the best demand is local,” Reiner adds. “We can have our soybeans processed here and fed to pigs in the region, which captures more dollars locally.”