It turns out cattle can make you a better crop farmer.

Livestock have a symbiotic relationship with the land. They feed off of the lush, green cover and leave behind waste that provides nutrients for new growth.

That’s why integrating livestock is on the list of five principles for improving soil health. 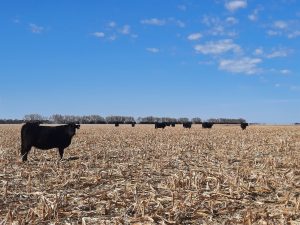 Other principles have a more direct connection to soil: keep it covered, minimize disturbance, encourage plant diversity, and keep a living root in the ground. But livestock like cattle or sheep can do a lot for the critters underground – the earthworms and microbes that break down organic matter and keep soil porous and resilient. That can all translate to better crop yields.

One of the first worries farmers have about cattle on cropland is what those heavy hooves will do to the soil. Will compaction keep rain from soaking in? Prevent the next crop from establishing a good root?

Studies by the University of Nebraska-Lincoln say no.

One study on the silty clay loam fields of eastern Nebrsaka found that 16 years of grazing corn residue after harvest didn’t hurt soil properties or crop yields. In fact, soybean yields improved by more than 3 bushels per acre after grazing, something the researchers said may be explained by an observed increase in microbial activity. In addition, cattle benefit your future soybean crop by eating volunteer corn seed, reducing the need for corn killer in next summer’s spray tank.

Letting cattle chow down on crop residue may seem to conflict with another soil health principle, keeping the soil covered. But the Nebraska studies assured that’s not an issue, either. Grazing should remove only about 15% of the residue cover, according to UNL experts.

Nutrients remain in place, too. After 16 years, their studies measured no differences in soil organic matter. Most nutrients, such as nitrogen, potassium, phosphorus and calcium, are put back onto the land as manure.

Growing a cover crop can provide several benefits for soil health. Not only does it provide more for cattle to eat when they’re grazing after harvest, but it adds plant diversity and keeps a living root that feeds the below-ground livestock community.

For the cattle producer, the extra feed source is a major appeal. Producers can extend their grazing season by moving cows to corn stalks or cover crops after harvest. It gives pastures a rest and reduces the winter feed bill. 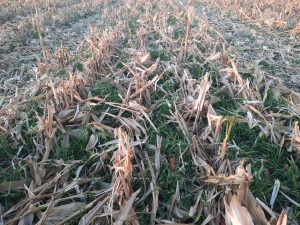 Among the dropped ears, co

bs, husks and stalks, there’s enough nutrition for cattle to maintain a healthy body weight, at least early in the grazing period, according to an article by South Dakota State University Extension Beef Specialist Julie Walker. Producers might need to supplement feed as cattle finish off the most palatable of the crop leftovers.

“It was just kind of less work if you let them feed themselves,” she said.

Now Johnson farms with her husband, Brian, and his parents, Alan and Mickie Johnson, near Frankfort in eastern South Dakota. The Johnson operation has long included cattle, but only in recent years did they start inviting the cows onto their cropland.

The Johnsons graze crop residue for different reasons than Jamie’s family did when she was growing up. While they enjoy an extended grazing season and fewer chores like she did in Nebraska, the Johnsons are especially motivated by the soil health benefits of cattle on cropland.

“They really do the work for you out there,” said Johnson, who serves as first vice president on the South Dakota Soybean Association board of directors. 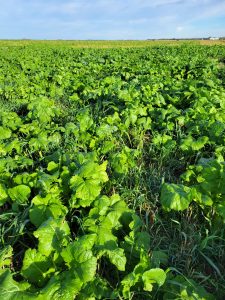 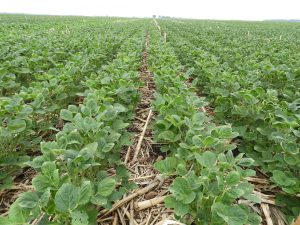 They’ve already noticed an increase in organic matter, and that the fields need less fertilizer, Johnson said. Zone sampling their soils after harvest this year, they determined they didn’t need to add any P & K fertilizer.

Before prices skyrocketed, the Soil Health Institute and Cargill did a survey of South Dakota farmers and found that soil health and nutrient management practices helped reduce fertilizer and amendment expenses by $21.59 per acre for corn and $7.30 per acre for soybean.

When the Johnsons give their grazing cattle supplemental feed, they do so strategically to help move the cattle and their manure around the field. They use a bale processor and lay the hay on a line across the stalks and move it 10-15 feet each time they feed.

For the last few years, the Johnsons have planted a cover crop of cereal rye on the coming season’s soybean fields. Spring wheat acres are planted to a grazing mix that’s especially palatable to livestock.

The Johnsons fly their cover crop seed onto their corn in August as the crop starts to mature. It can be tricky to apply it at the right time, Johnson said, so the seed falls through the tall corn crop and germinates.

This past year worked out perfectly. Because of the hot, dry summer, corn matured early. The earlier the cover crop is planted, the more time it has to grow lush and green before winter. And it turned out for the Johnsons that their rye went on just before it started raining – something of a miracle after a dry summer.

“It looks fantastic,” Johnson said. “The winter wheat is up and looks beautiful.”

Between the cover crops and winter wheat, over half the Johnson acres were green and growing well after fall harvest.

In mild winters, the Johnson cattle are able to graze until it’s nearly time to plant. Last year, cattle were out on corn stalks until mid-March. Usually, though, they just aim to keep their cows grazing late into the fall before snow piles up.

To avoid compaction issues, the Johnsons monitor field conditions and pull the herd if the ground gets too muddy. This fall, it rained before they moved their herd on to the rye, so they waited a week for the soil to absorb the moisture. If it’s warm and wet, the Johnsons pull the cattle, then return them to the field after a freeze firms up the land again.

“You just have to be attentive to the soil in your field,” Johnson said. 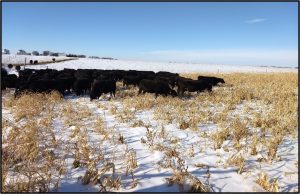 After winter snow melts away, sometimes the herd is able to return to graze the spring growth. Then, soybeans are planted into standing rye. A couple days after planting, they spray the cover crop to terminate it and allow the beans to thrive.

The Johnsons have been impressed by how the practices have helped production.

“Even in a drought year, we still had excellent yields,” she said.

Cover crops for grazing count as another bonus. The dry year was hard on pastures, and hay production was not stellar, Johnson said. The rye helps fill in.

“It’s kind of like an insurance policy almost, to have that in your back pocket,” she said.

“Now the benefits outweigh the input costs,” she said, noting the options it provides for their farm and the resiliency they’ve seen come from it.

n honor to be recognized, but there’s always work to do, Johnson said.

Even for operations without livestock, Johnson encourages farmers to partner with neighbors or look into a grazing exchange like that offered by the South Dakota Soil Health Coalition. She’s confident livestock producers will appreciate the reduced workload of having to feed cattle and haul bales – and they’ll appreciate healthier cattle, too.

“Just let the cattle do what nature intended them to do,” she said. “Give them space and let them graze.”

By Janelle Atyeo for the South Dakota Soybean Association