Record meat exports last year had a major impact on soybean growers’ bottom lines. A study commissioned periodically by the U.S. Meat Export Federation (USMEF) underscores the fact that the livestock sector is the top customer for U.S. soybean growers. Just the hogs that were exported from the U.S. in 2021 consumed 2.36 million metric tons of soybean meal, according to John Hinners, senior vice-president of industry relations with the USMEF. 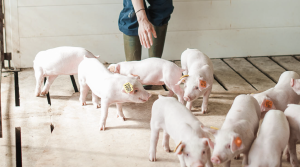 “In 2021, pork exports contributed 12.6 percent to a bushel’s value,” said Hinners, during an interview. “An average bushel of soybeans was $13.13; at the end of the day, that value was $1.65 per bushel.” It amounts to $1.3 billion dollars’ worth of soybean meal fed to the pigs that were exported in 2021. Breaking down the pig carcass further, said Hinners, different cuts amount to differing volumes of soybean meal.

“The study validates the red meat industry’s collaborative approach to export market development,” said USMEF Chair-elect Dean Meyer, a corn, soybeans, cattle, and hog producer near Rock Rapids, Iowa, in a news release. “Beef and pork exports drive value directly back to my farm and this study helps confirm the return on this investment for all corn and soybean producers.”

South Dakota soybean growers have invested checkoff dollars in support of the U.S. Meat Export Federation’s efforts to promote pork and other meat exports. “It’s a great partnership that the red meat industry’s had with soybeans, and we can work hand-in-hand and support each other, and create value of putting that soybean meal through that high-quality pork,” said Hinners. “It’s a win-win for U.S. agriculture.”