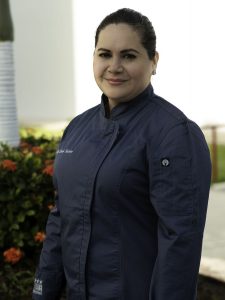 Denise Flores, USAPEEC Mexico Celebrity Chef, is excited to join the line-up for AgOutlook 2020 for the first time! She will be showing us her favorite tex-mex inspired recipes with the Mexican flare we all know and love. As a graduate of the prestigious Culinary Institute of America, Chef Denise’s internationally diverse culinary career began in New York City, but her love for cooking began long before that in the heart of Mexico.

After graduating from CIA in 2004, Denise cooked in prestigious international restaurants such as the LE CIRQUE NYC. She was also a part of the opening team of The Modern by MoMa and Beacon Restaurant also in New York.

Upon returning to Mexico, Denise continued as sous chef in training with renowned Mexican Chef Marta Ortiz Chapa at the Aguila y Sol restaurant, now called Dulce Patria. She was also part of the opening team of the prestigious St. Regis Hotel in Mexico City.

In 2010 Denise left the hotel industry to open her own restaurant, catering service and consultancy agency. In 2013 she became the executive chef for the Universidad del Valle de Mexico (UVM) Campus Merida for Laureate International universities and, two years later, became Dean of the Hospitality, Tourism and Culinary Arts School at UVM.

Around that same year, Ordoñez began to work on different projects with USAPEEC Mexico. At the beginning of 2020 she left her position at UVM to become a consultant for USAPEEC Mexico and successfully started her own catering company called HUETA in the city of Merida, in the state of Yucatan.

Chef Denise will be giving us a demo of three recipes: roasted chicken with grits or polenta, stuffed turkey with sweet potatoes and apple, and duck torta Ahogada. Her flavorful recipes, featuring U.S. poultry are sure to leave us all hoping for more! Brought to you with support from USA Poultry & Egg Export Council and South Dakota Soybean Research & Promotion Council.

Roasted Chicken with Grits or Polenta