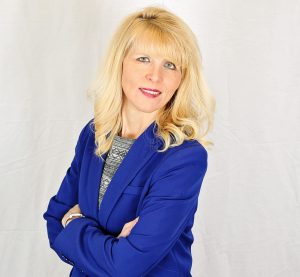 Michelle Rook is one of the top farm broadcasters and market reporters in the country.  She is the Managing Farm Director for WNAX Radio in Yankton, SD and KMIT Radio in Mitchell, SD.  She leads a farm department at WNAX that consistently has the highest farm audience ratings in the nation and oversees the production of nearly 50 news, weather and marketcasts daily.

She also anchors Agweek TV, a half hour farm news program syndicated on stations in the region and Canada.  Michelle is a freelance reporter for nationally syndicated AgDay Television and U.S. Farm Report.  She served as a reporter and meteorologist for KTIV-TV and KMEG-TV in Sioux City and KSFY-TV in Sioux Falls.

Michelle has reported from the soybean fields of Brazil, covered the ratification of the U.S. Australia FTA from Canberra and covered farm policy from Capital Hill.   Michelle has been recognized for her journalistic excellence being named the Doan Award Recipient in 2015 for her serious on the rail crisis in the western corn belt and was named the NAFB Farm Broadcaster of the year in 2008.  In 2016, she received the South Dakota Governor’s Ag Ambassador Award.  Michelle has also won the NAFB Horizon Award, NAFB Radio and Television Newscast and Marketcast Awards, numerous NAFB News Service Awards and Associated Press recognition. She has received media recognition from the SD Farm Bureau, the SD Soybean Association and the SD Pork Producers Council, SD Farmers Union, NE Agribusiness Association and the National Farmers Union. She was named a Distinguished Alumnus by the SDSU Journalism Department.

Michelle is the past president of the National Association of Farm Broadcasting and served on the national board for seven years.  She currently services on the South Dakota Ag and Rural Leadership board of directors.

Michelle owns her own video production and communication business which focuses on agricultural content, including commercials and corporate videos.  She also produces agriculture and consumers news segments for commodity organizations in the region, including the Heartland Consumer Report which is designed to educate and inform consumers about agriculture.  The reports have run on KELO-TV in Sioux Falls and KTTC-TV in Rochester, Minnesota.  She also conducts media training sessions and is a regular keynote speaker and emcee at events across the country.

Michelle’s agricultural roots are deeply imbedded in this region. She grew up on a dairy and crop farm in eastern South Dakota.

She has bachelor’s degrees in dairy manufacturing and ag journalism and a master’s degree in journalism from SDSU.  She also earned her broadcast meteorology degree from Mississippi State University. She was a state FFA officer in South Dakota, an American FFA Degree recipient and national FFA officer candidate, plus was involved in 4-H for 11 years.